Any fan of The Lord of The Rings and Hobbit movies knows well that the picturesque countryside of New Zealand plays such a critical role it is almost another character. Checking out the filming locations offers the opportunity for a jam packed holiday of spectacular scenery.

This post contains affiliate links. Making a purchase through these links will earn a small commission at no additional cost to you, and is a great way to show your support for this site.

Planning your Lord of The Rings road trip

The Lord of the Rings filming locations can be found on both the North and the South Island, so depending on what time you have available you may need to pick one or the other, since there is a lot of ground to cover on both islands.

While seeing the filming locations was not the primary purpose of my visit to the South Island, as a long time fan of the books and movies I was keen to squeeze in as many locations as I could. I was reliant on the internet for finding locations, but I found there was a lot of incomplete and inaccurate information online, so if you are serious about visiting the actual filming locations used I would recommend purchasing the official Lord of the Rings Location Guidebook to plan your trip. I found this gem in Queenstown and found it had a number of locations I had not seen referenced online. Australian readers can find it here. Information from the guidebook has assisted in the compilation of this post.

I planned a South Island road trip that enabled me to catch a number of locations on the way. Unfortunately due to weather and road conditions I was unable to see as many as I would have liked, and was only able to see some due to the route I took. Some locations are also inaccessible by a 2WD vehicle so tour recommendations available through Get Your Guide have been included. I booked all of my tours through Get Your Guide, and due to circumstances outside of my control I had to cancel a number of them. They were super helpful and great to deal with. They were also prompt with all refunds which was great for me trying to make alternative arrangements.

Where to find it: Hakatere Potts Road, Ashburton Lakes. This can be planned as a diversion on the drive between Christchurch and Dunedin.

Mt Sunday is in the middle of nowhere, and has 20km of unsealed road to get to it. I did make it out there in a 2WD Corolla, but parts of the road are a little rough. A remote lodge approximately 5km before it is the closest source of refreshment or amenities. A short hike to the top will offer panoramic views of the plains below bordered by the mountain ranges. The day I was there it was the middle of a thunderstorm, so I had to be content with snapping a quick picture and dashing back to the shelter of my car.

Continuing past Mt Sunday will take you further into the Rangitata Valley, which was digitally altered to use for the location of Helm’s Deep.

Tip: Put Mt Sunday into your GPS ahead of time, as once you get close the the mountains you will lose phone service and wont be able to. I wasted nearly an hour searching for the location because I had input Ashburton Lakes into my GPS and consequently took a wrong turn. It was a pretty drive through the Hakatere Conservation Park though. 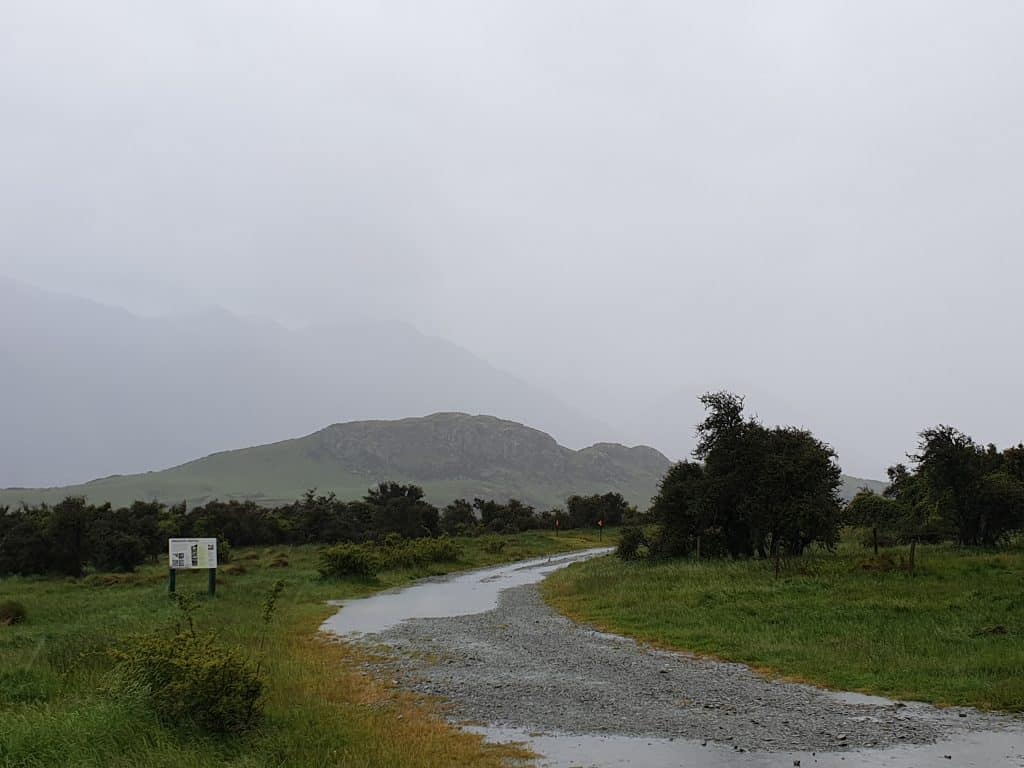 Bordering the Fiordland National Park, Te Anau is a great spot to stop over if you are planning a drive to Milford Sound. It’s pretty much the closest accommodation outside of the sound itself – which is likely to hit the hip pocket somewhat!

It’s also a great point for a number of Lord of The Rings filming locations.

The Kepler Mire: The Dead Marshes

This is one that is actually absent from the guidebook, but I have found it referenced online in a number of places. The Kepler Mire is a string bog that was was used for the flying Nazgul scenes. The Dead Marshes themselves were a built set.

When I went it was fenced off preventing access so I was only able to see it from the road. This may have been due to the significant amount of rain.

Where to find it: A couple of kilometres along Mount York road.

Tip: Accommodation is available at Barnyard Backpackers, a short distance from the Mire. It was a clean, comfortable and inexpensive hostel. 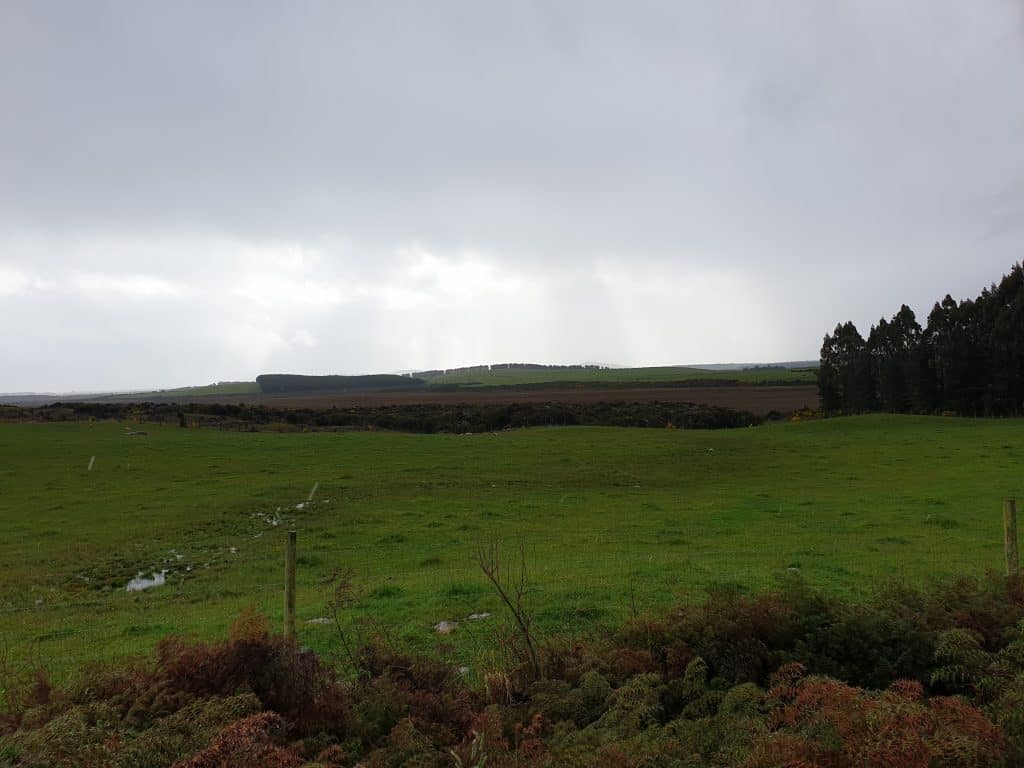 Flowing into Lake Manapouri, parts of the Waiau River were used for the River Anduin and where the Ent-wives made their gardens. 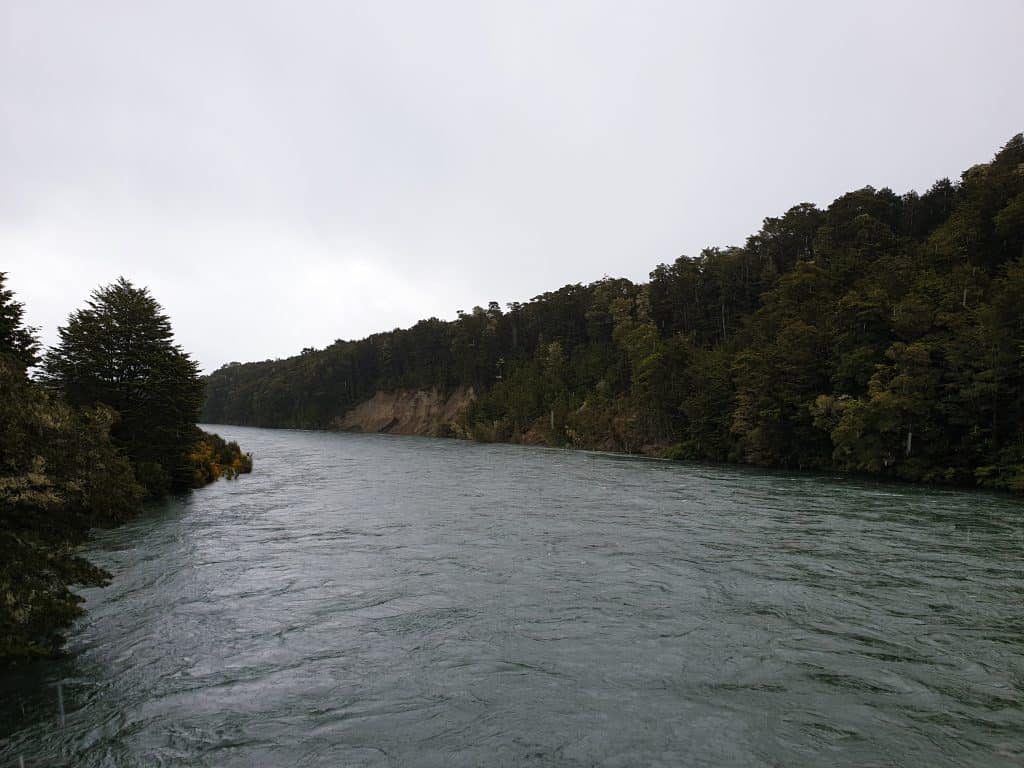 The alpine mountains on the right of Lake Manapouri are home to the Norwest Lakes, used in scenes after the Fellowship leave Rivendell and Arwen’s flight with Frodo from the Ringwraiths. It is accessible by helicopter.

The day I visited the mountains were shrouded by cloud, but Lake Manapouri makes for a pretty photo regardless.

Where to find it: 20 kilometers from Te Anau town centre. No fancy directions required, pop the lake into your GPS or follow the signs. 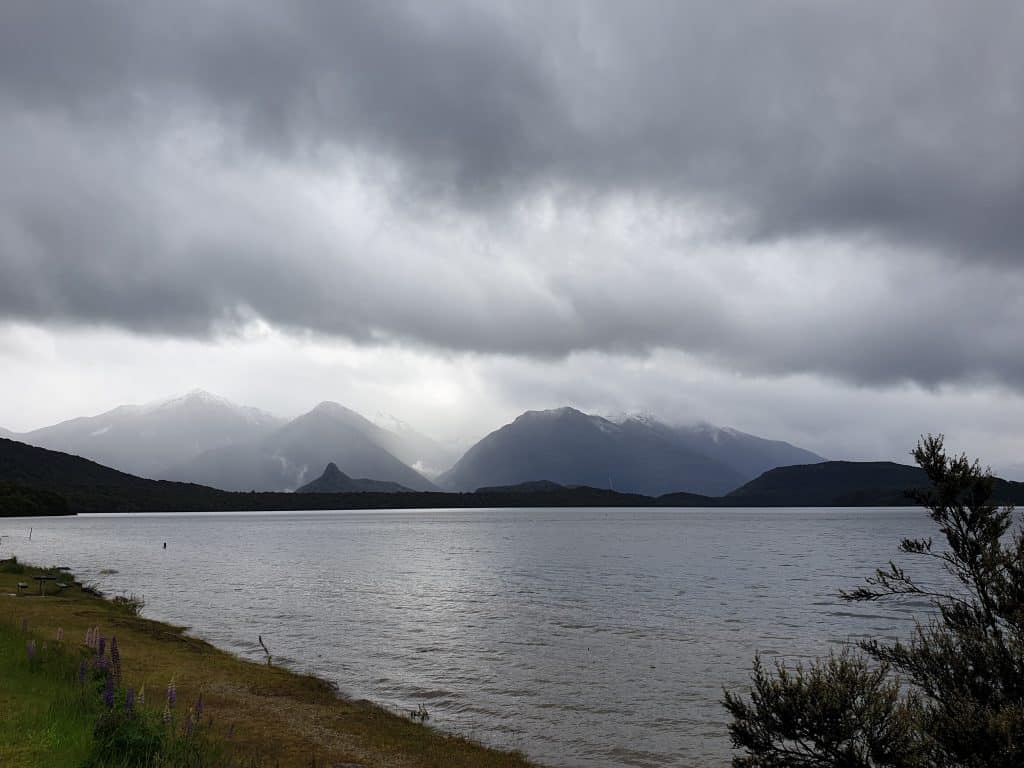 The large stretch of forest along this country road were used in filming scenes in Fangorn Forest, and it was immediately recognisable driving up to it. 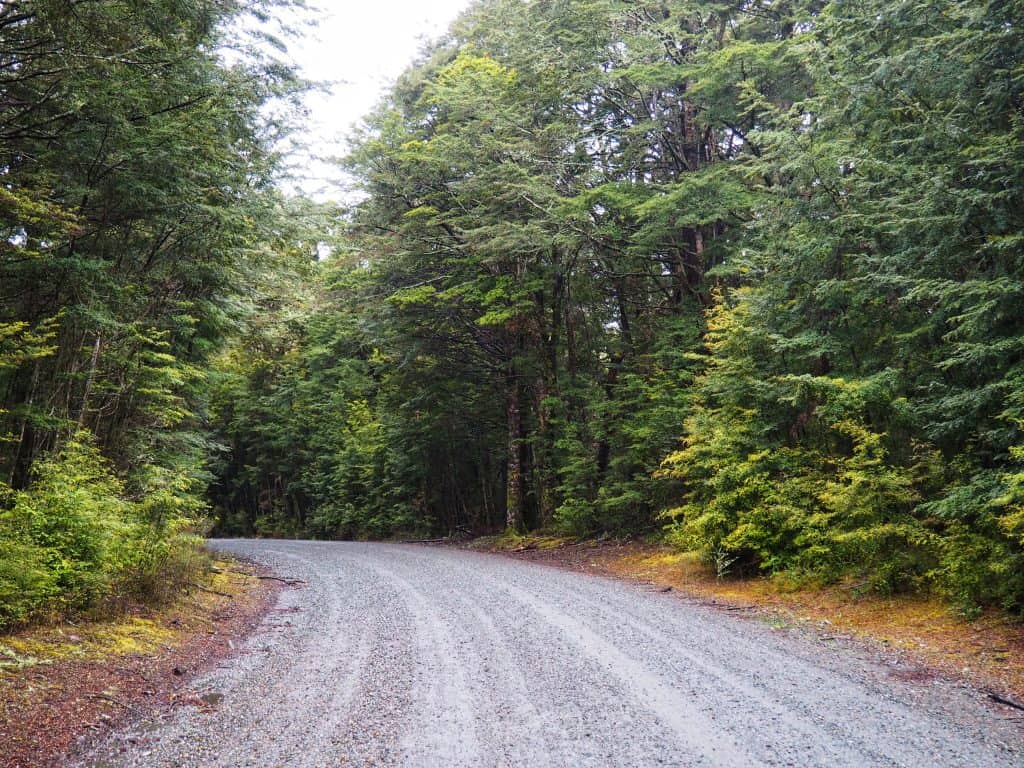 The turn off for Mavora Lakes is off the Te Anau highway, a further 39 kilometres along is an additional filming location of Fangorn Forest and where the riders of Rohan burnt the orcs. It is also the location of Nen Hithoel, the end of the Fellowships journey down the River Anduin and where Sam and Frodo take their leave for Mordor. The swing-bridge at North Mavora was used for the scene when the Fellowship departs Lothlorien.

Unfortunately I ran out of time to visit these locations.

Queenstown Lord of the Rings Locations

Not all of the locations used in or near Queenstown are accessible by an ordinary vehicle, so it is worth looking at tour options running out of Queenstown. I wanted to do the full day Lord of the Rings tour, however it books out fast and I wasn’t able to get a spot. Instead I chose a half-day 4WD tour with Nomad Safaris which turned out to be a heap of fun!

This was included in the tour I did, however the roads are suitable for a 2WD vehicle also.

Where to find it: If you’re doing this location yourself take The Remarkables Ski-field access road, you’ll be able to pull over along the way to have a view of the mountain range that is home to the location used for Aragorn leading the Fellowship after their escape from Moria. If you keen to take in the specific location itself, it is a 20 minute hike from the Ski-field carpark. Alternatively, you can book a helicopter flight with an alpine landing.

This location also features in Mission Impossible and Vertical Limit. 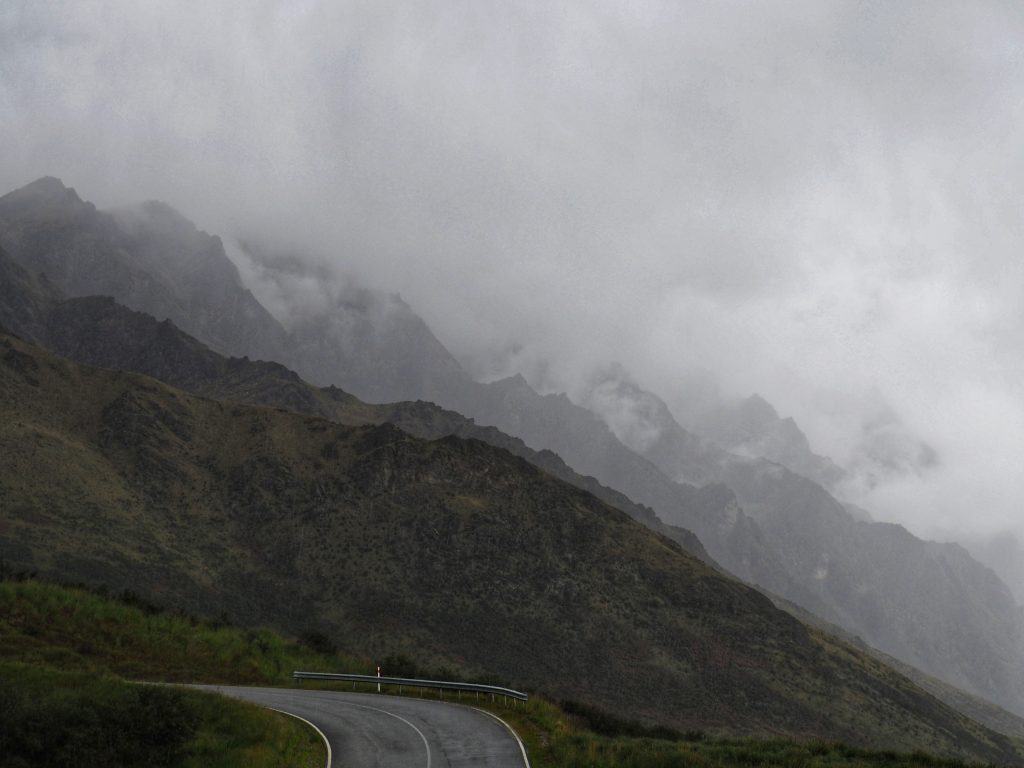 Visible from a number of vantage points across Queenstown, you can also just spin around from the Ski-field carpark to see this location. You won’t be able to get any closer, the location is no longer open for public access.

This location was used multiple times in all three films due to it’s landscape and 360 degree views from the top. A change in camera angle offered an entirely different backdrop. It features in the scenes where the Rohirrim flee Edoras for Helms Deep, Gandalf walking, and Aragorn plunging over the cliff after battling a Warg. 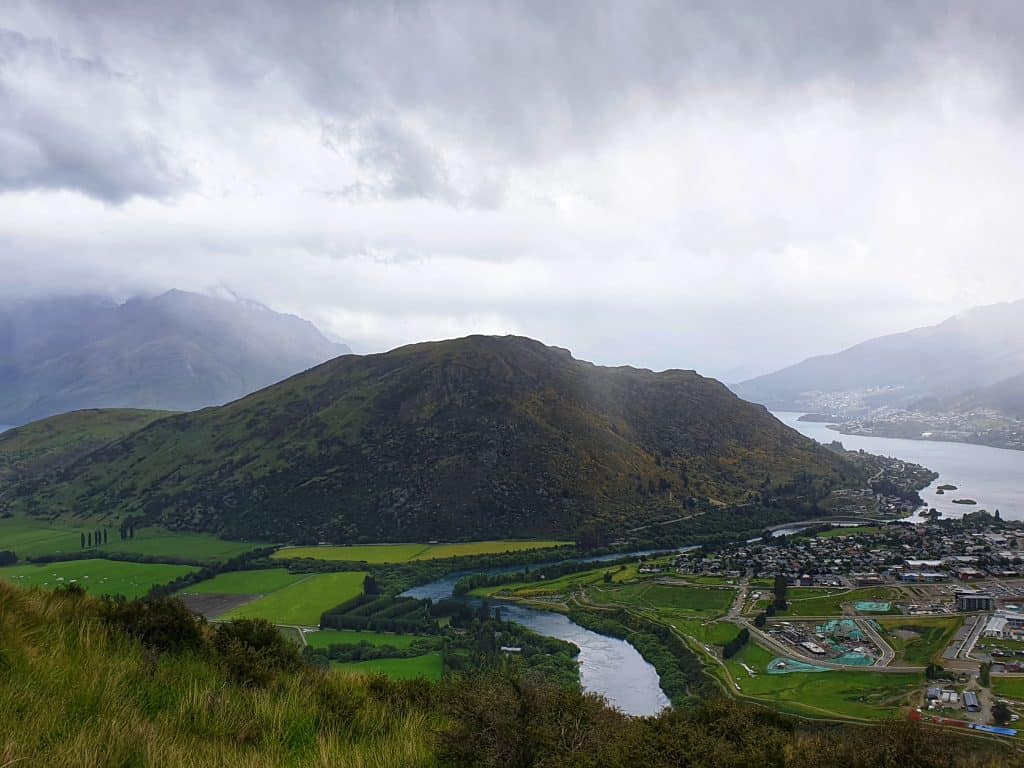 Kawarau River: The Argonath (Pillars of the Kings)

The Pillar’s of the Kings that the Fellowship float past were digitally added in against the cliffs through which the Kawarau River flows. Our guide told us that Peter Jackson’s attention to detail was such that he asked Viggo Mortensen’s wife for photographs of his father and grandfather, and these were the faces which appeared on the Argonath.

Where to find it: The entrance road to Chard Farm Vineyard, directly opposite the AJ Hackett Bungy Jump, New Zealand’s first established Bungy. 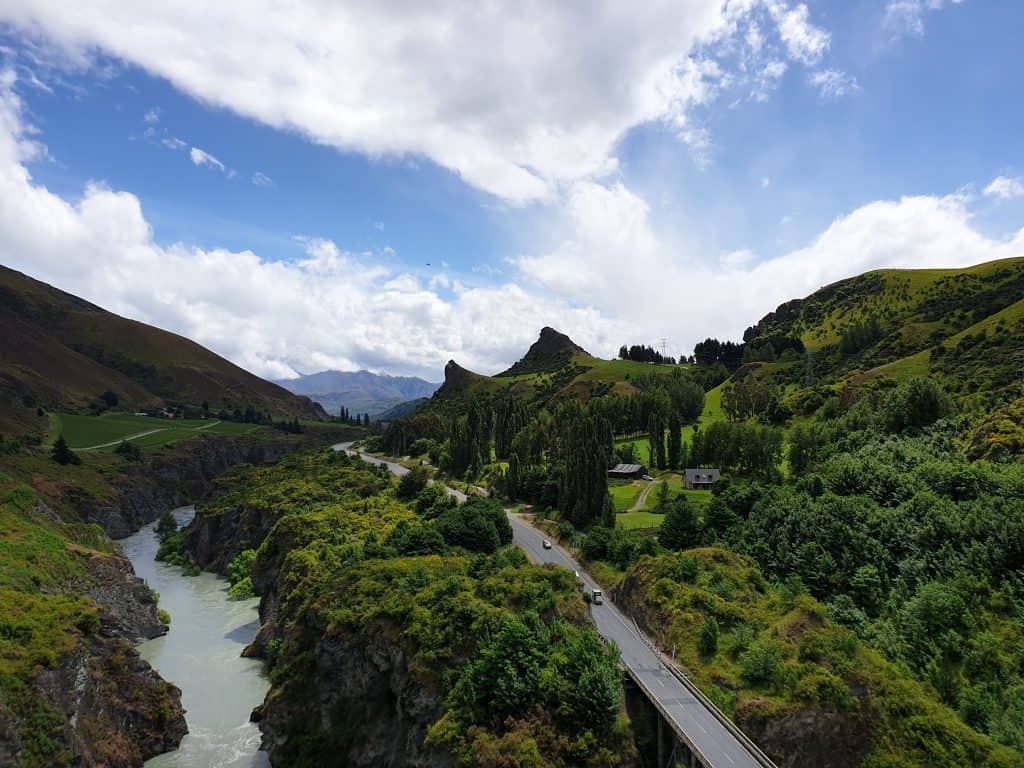 Skippers Canyon: The Ford of Bruinen

This is a location you wont get to without a 4WD tour, as it is listed as one of the most dangerous roads in the world. A sign greets you upon entry advising that rental vehicles are not covered beyond this point. The road has no security fencing and is bordered by sheer drops to the canyon below, and is two-way despite being dangerously narrow in some places. In winter much of the area is a ski-field.

Footage from Skippers Canyon was used to create the canyon walls of the Ford of Bruinen.

Pssst…looking for somewhere to stay in Queenstown?

Arrowtown Lord of the Rings Locations

Arrow River: The Ford of Bruinen

Located a 20 minute drive from Queenstown, Arrowtown is a quaint old gold mining town that is worth a visit regardless.

Where to find it: The Arrow River can be found a short distance from the town centre. If you tackle this one yourself you’ll have some river wading to do, but the Nomad Safari’s tour will drive up the river the 200 metres to the location.

The Ford of Bruinen is where Arwen summons the water to wash away the Ringwraiths. The scene was spliced together from three locations, the others being the Kawarau River and Skippers Canyon, but the Ringwraiths actually cross the river in this spot as the water was not too deep for them to do so.

If you’re on the tour you’ll stop for afternoon tea here and have the opportunity to pan for gold. 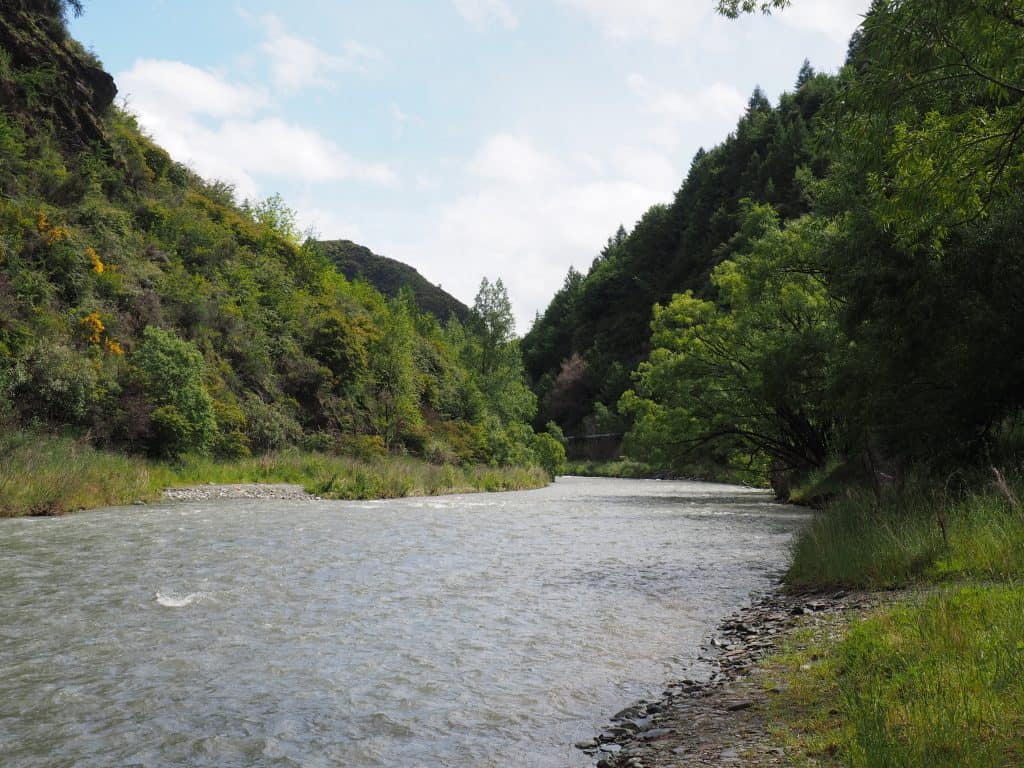 Featuring in a brief sequence on the history of the ring, it was here Isildur was attacked by the Orcs and lost the one ring into the Anduin River.

Where to find it: A short walk from the Arrowtown centre, turn left into Nairn Street and continue to a riverside path through the trees. 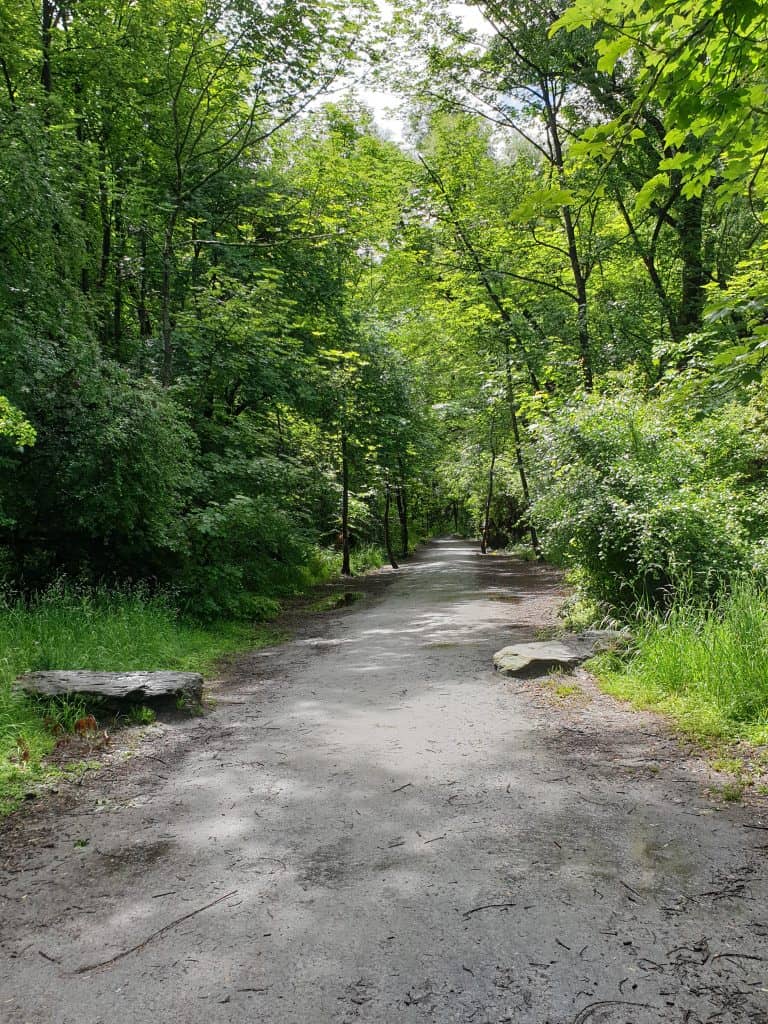 Glenorchy Lord of the Rings locations

The Queenstown to Glenorchy drive is spectacular, offering views of snow-capped mountains over Lake Wakatipu. However, you will need to take a tour in order to access the locations. Nomad Safari’s also offer a half-day 4WD Glenorchy tour.

Where to find it: On the road from Queenstown to Glenorchy, 12 kilometres from Queenstown. Signs on the main road will direct you down to a large camping area. From here you are able to walk to the locations where Sam and Frodo see the oliphants and where they cook the rabbit Smeagol has caught. The campground pictured is where the battle takes place. 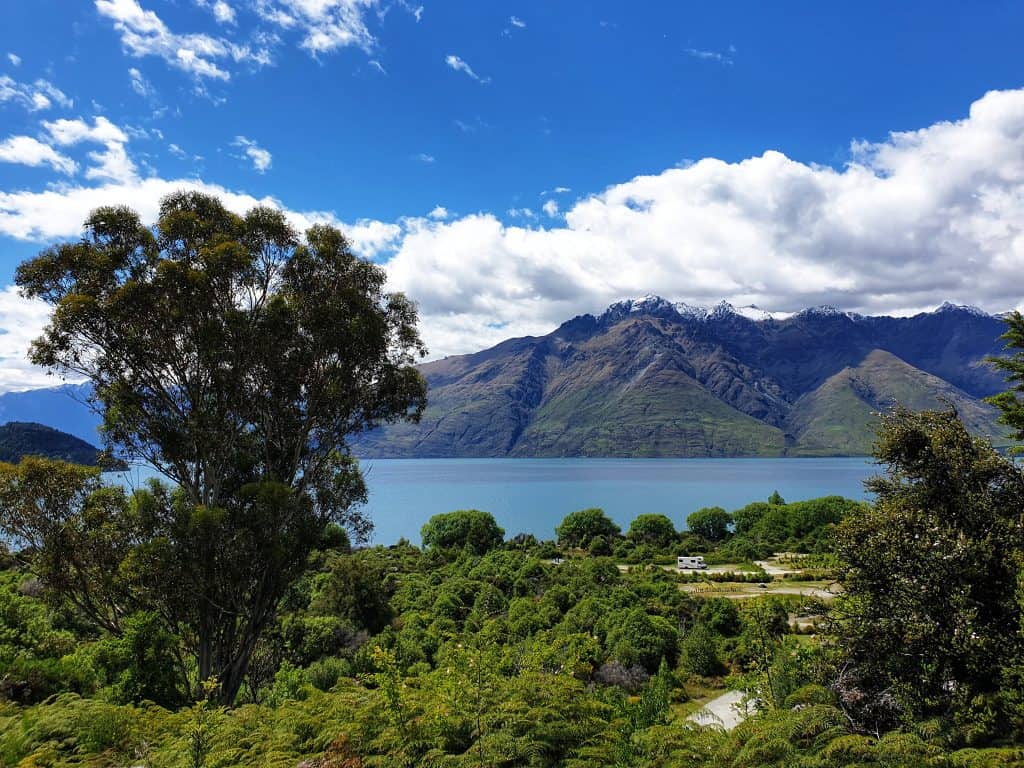 Where to find it: You’ll find Mt Earnslaw towering over the town of Glenorchy, but it is also visible as you drive around Lake Wakatipu. 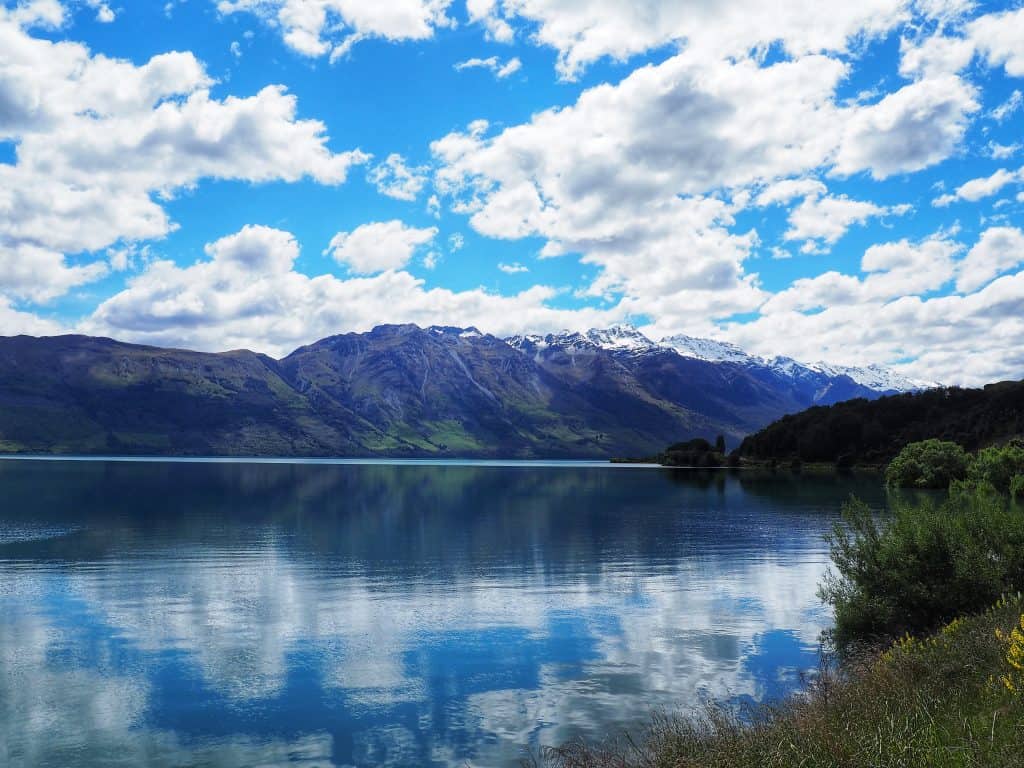 Where to find it: From Glenorchy, follow the signs for Paradise. I wasn’t able to make it all the way to these locations due to a river crossing I wasn’t prepared to brave without a 4WD. I got close though, and the forest along the way is the same type that was used for Lothlorien.

Dart River Adventures offer river trips that allow you to experience these locations. 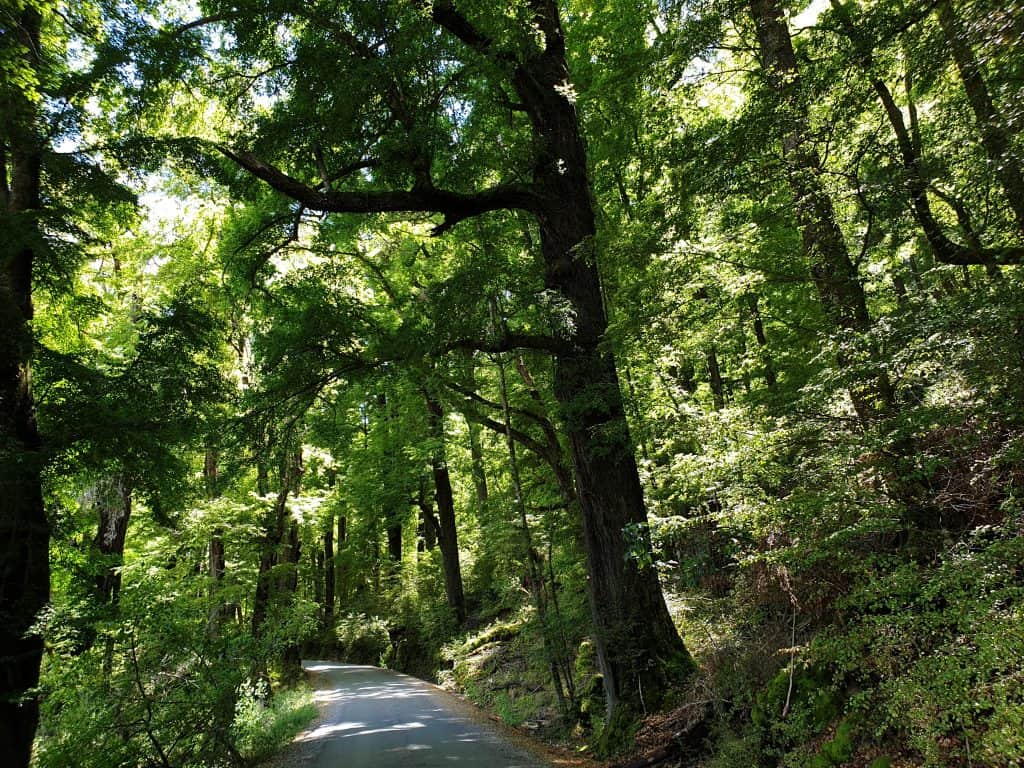 Delilah from Our Travel Mix was kind enough to send me over this photo from the Isengard location. 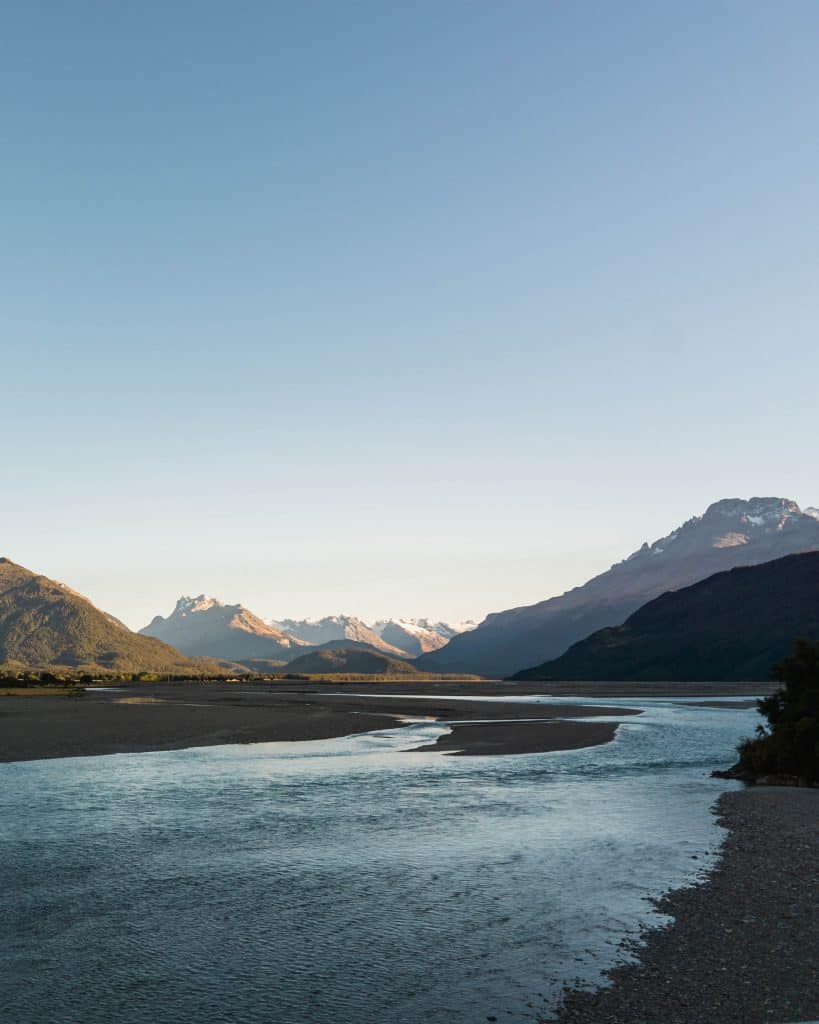 Wanaka Lord of The Rings locations

Where to find it: You can’t miss this one. Look out across the lake from town and those are the Southern Alps rising on the far shore.

This location was used in the scenes after Gandalf’s eagle-aided escape from Orthanc. It was also used to depict the Misty Mountains, this part specifically the peaks around Moria. 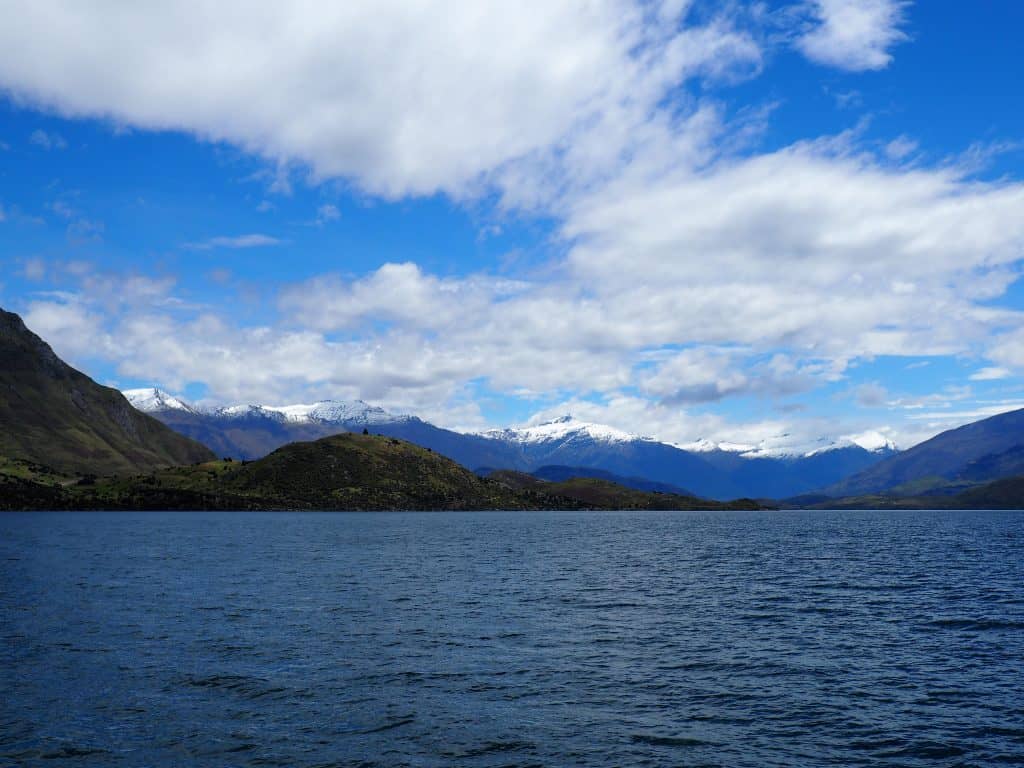 I hope you’ve enjoyed checking out these locations as much as I did. If so please share! 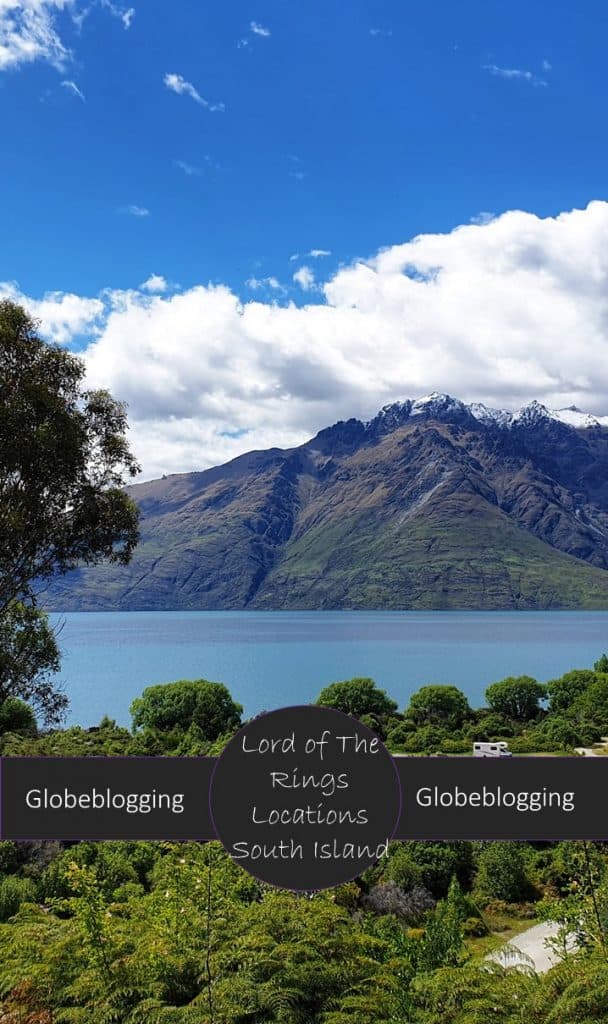 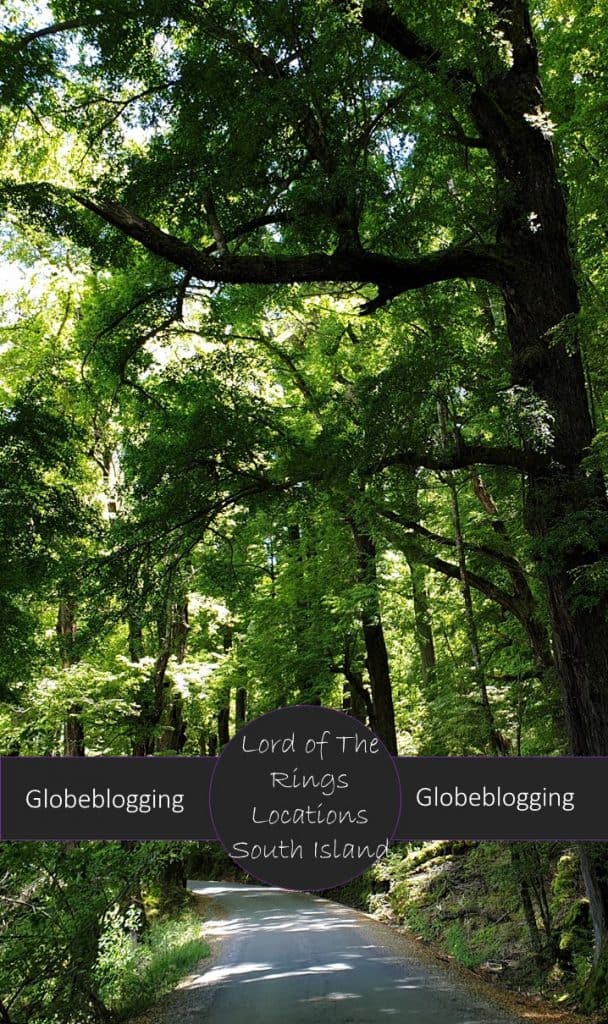