I am so terribly excited to get to Antigua. I picked our hotel specifically because you can see one of the volcanoes erupting from the rooftop terrace! We’ll be there for three nights, before we move to another hotel in Antigua for the start of the tour and another two nights.   The hotel used by the tour had mixed reviews. I had elected to choose our own hotel for the additional nights. Besides…Volcanoes! And I hear the coffee is amazing!

Back to Mexico City airport

The hotel called a taxi for us, slightly more expensive than the one we’d taken there from the airport. We’d considered an Uber but ruled it out given all the ones we had taken had been small vehicles, and we weren’t confident of getting one with space for our luggage. The guaranteed larger vehicles cost more than a taxi.

Our transfer to the airport was smooth and we found our check in counter after a long walk through the airport terminal. The attendant asked for my immigration form, which I had been handed upon entry into Mexico. My heart accelerated as panic kicked in. I was certain it hadn’t been given back to me. I located it safely in my document wallet next to my passport where organised me had placed it.

After offloading the bags we continued through the terminal, stopping off to use a bathroom. Now I wouldn’t normally go into details of such ablutions, but what happened in that bathroom has scarred me for years to come.

There were two cubicles. A step elevated the toilet in the right cubicle from the floor. Bizarrely this was for disabled use. Go figure. I hung my bags on the hook on the back of the door.  Ruth immediately left the other cubicle, saying ‘I think that one is blocked’ to someone.

The toilet bowls in this part of the world aren’t the same as in Australia, the bowl is more elongated and the water level is much higher.

So I heard a flush from the next cubicle, and the unmistakeable sound of water flowing into an already full bowl, and then running over. I looked down at a rapidly spreading pool of water flowing under the door between the cubicles, bringing with it human waste of various form. ‘Oh my god’ I uttered with revulsion, thankful for the step upon which my feet rested and the hook that held my bags.

The entire cubicle was flooded a short time later. My saving grace, and that of the people soon to share a plane with me, was it had not yet gone under the door. From my step I was able to stretch to get my bags and put them over my shoulders, open the door and leap over the water to the safety of the dry tiles beyond.

The rest of the visit to Mexico airport was uneventful, with patchy wi-fi (for me anyway) we waited for our plane. There isn’t a lot of choice for airlines so we flew Interjet, a local Mexican airline. While it was certainly a no-frills flight, I found I had more space than I had on our American Airlines flight to Mexico.

With impressive efficiency we are walking out of Guatemala City airport within thirty minutes of our plane landing. Our transfer driver is standing on the other side of a fence holding a sign with my name. We load on up and are on our way to get our first look at Guatemala.

The evidence of western influence abounds, advertisements for Pepsi (they like their sugary soda drinks here) and fast food chains on the side of the road, and on the road itself. It seems a higher proportion of the cars here are in better condition than in Mexico City, or are higher end vehicles. Toyota’s seem prevalent and motorbikes also appear highly common.

It took a little under an hour to get to Antigua and the change in the road once we enter the town was immediate. The streets were entirely cobblestone. We bump along at a much slower pace until we pull up to our hotel. The driver gets out and rings the bell.

Like most places here we soon find out, the exterior door of the Hotel Candelaria where we will spend our first three nights remains locked.

The doors open to the interior of the hotel, a reception area beside an interior courtyard filled with plants and a flowing fountain. The building was a square shape, built around the courtyard, and concealed by an exterior of plain stone walls. The two floors above are the same design. Railings fringe the edge of the hallways the rooms open onto, and there is open sky above the centre courtyard. The final set of railings lines a rooftop terrace. Our room is on the ground floor, with two double beds and a bathroom. It also has a wardrobe, dressing table and chair along the wall. A set of double doors opens onto a corner courtyard with another room on the other side.

I bound up the stairs to the rooftop while Ruth takes the opportunity to lie down.

From the rooftop terrace I can see three volcanoes that look over the town. I learn they are Agua, Acatenango and Fuego. Fuego sits beside Acatenango and is still active, periodically shooting small eruptions of smoke and molten stones into the sky. While I watch it sends up another plume of smoke. In the daylight I can’t see whether molten rock went with it.

By the time we venture out in search of food darkness has set in. The hotel recommends a location to look for dinner since the hotel doesn’t serve it. Outside the safety of the hotel walls the streets of Antigua were dark. I was uneasy in a new place. The most well-lit option was in the direction recommended by the hotel attendant. Before too long we came to the Hotel San Domingo complete with a lovely rooftop terrace. I enjoyed a tasty bit of steak and a Pina Colada or two. Not knowing the area we happily headed back to our rooms and bed. 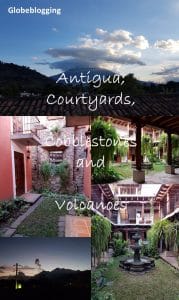 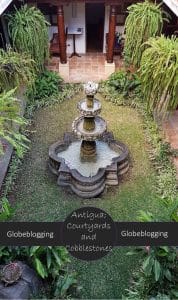 1 thought on “Antigua; Courtyards and Cobblestones”