When you think of visiting LA, its hard not to think of the glitz and glamour of Hollywood. The City of Angels is California’s most populated city and the second most populated in the entire USA. An estimated 4 million people live in the sprawling expanse of the city, which covers an area of about 1,210 kilometres square. In a city of such immensity it can be overwhelming.

While there is plenty to do in the broader LA area and California, if it’s your first time in LA and you happen to be in town for a brief sojourn, here’s my recommendations for where to allocate your time, whether you have 2 days in LA or 4 days in LA. The Mediterranean climate means that even in February, the coldest month of the year, it is usually still comfortably warm, making LA a great place to visit all year round!

It is worth taking a look at the Go Los Angeles card before buying any tickets. It will provide you transport and discounted entry to many LA attractions, and can result in good savings if you are already intending to visit the included attractions.

While the taste of Hollywood permeates much of LA, Day 1 is dedicated to immersion into the Hollywood tourist experience.

Short tours can be a great way to see a city in a limited time, and often saves you the headache of worrying about transport. LA is home to the rich and famous, and many of the bus tours will include a cruise past celebrity homes, and other LA landmarks such as the Chinese Theatre, Rodeo Drive and Venice Beach.

If you are spending 4 days in LA I recommend looking at the Hop On, Hop Off bus. You can buy a pass for several days which helps you getting around over the coming days, while having all the points of interest indicated to you on the way. If you are keen to visit some of the LA attractions, check out the Explorers pass, which features a number of attractions.

If a tour including celebrity homes is more your style, check out the Hollywood and Celebrity Homes Tour, which runs for 2 hours and includes landmarks such as the Viper Room, Chateau Marmont, Rodeo Drive and the Capitol Records building. Celebrity homes will include Leonardo diCaprio, Tom Cruise and Elvis Presley.

Naturally you don’t want to miss the Hollywood Walk of Fame, a series of over 2000 stars embedded into the footpath of Hollywood Boulevard and Vine Street honoring stars of today and days gone by. While it’s not terribly exciting, it is a must see just for the experience, but watch out for the people on the street selling CD’s. They’ll make out they really want you to take their music home and when you give them your name they’ll scrawl it on the CD, give it to you then ask you to pay. Since it has your name on it they won’t take it back and the one who got me hit me up for more money than I had spent on the last CD by one of my favourite artists. They can also get quite aggressive if you refuse to engage with them, the next one yelled after me that I was racist when I wouldn’t take his CD and it tarnished my day somewhat. 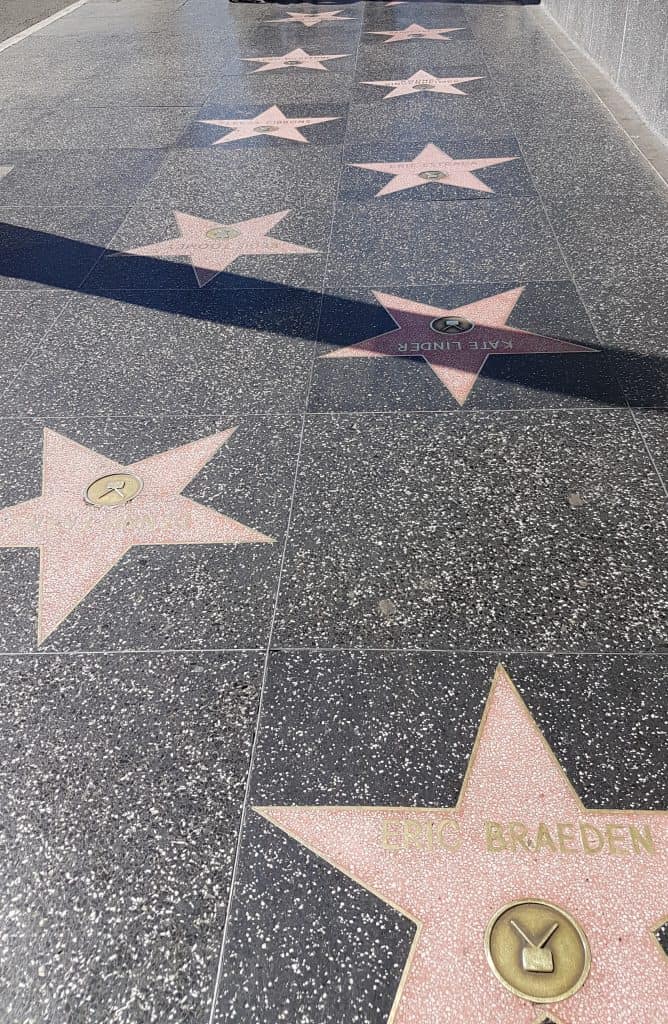 I spent an afternoon hiking in Griffith Park and it was one of the top things I did in LA! This is an activity you want to save for the afternoon, because the view of the sun setting over LA from the Griffith Observatory at the top is worth the trek!

Griffith Park is one of the largest parks in North America, larger even than New York’s Central Park, covering an area of over 4,000 acres. It has a long and colourful history, which is why it is worth investing in a guided hike with a local to hear all about it. 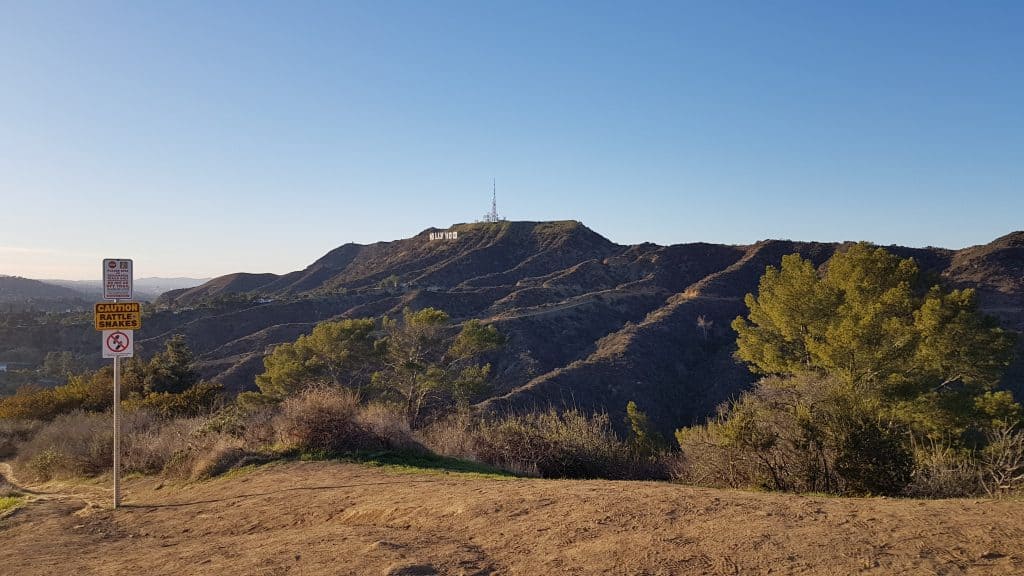 The climb to the top will bring you into view of the famous Hollywood sign, no longer able to be directly accessed by the public, before finishing at the iconic Griffith Observatory. Even those who haven’t seen the Academy Award winning La La Land, are usually familiar with the scene of Ryan Gosling and Emma Stone dancing in front of the Observatory. 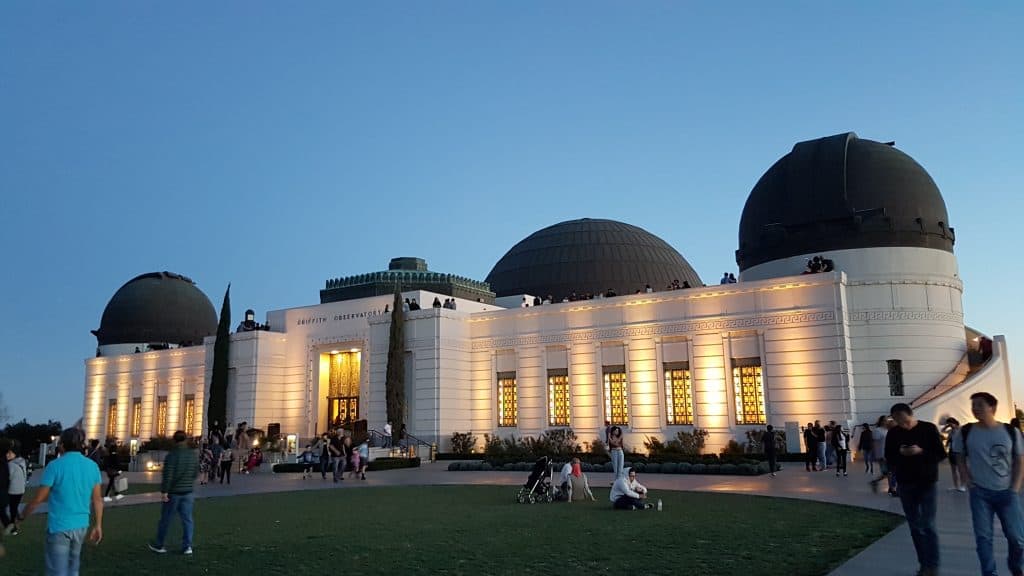 Linger outside on the viewing platform to watch the sunset over LA, then take advantage of the free entry to the Observatory to stroll around the exhibits inside. 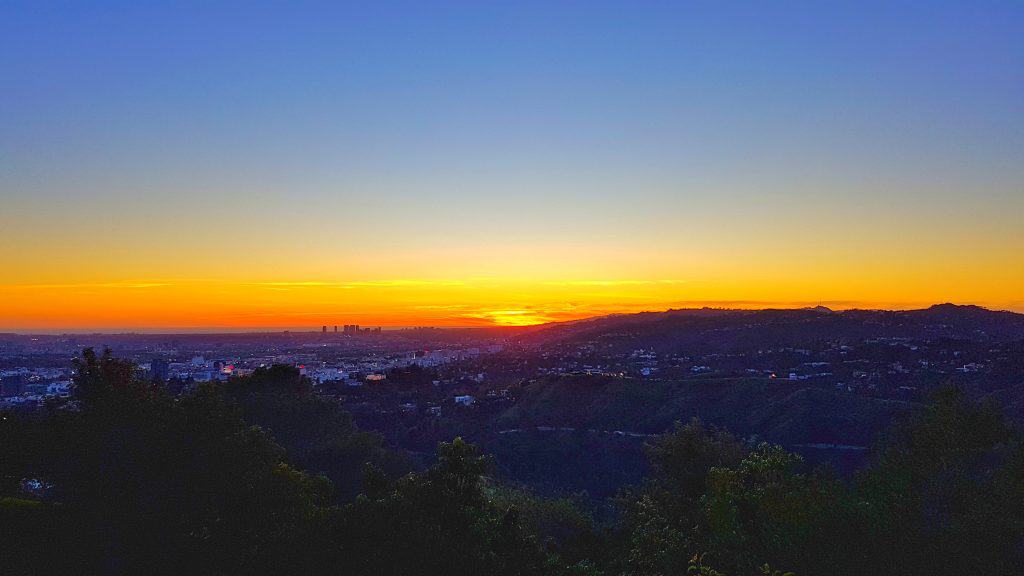 Getting there: If you aren’t on the hop on hop off bus, an Uber from the Walk of Fame to Griffith Park cost me less than USD$10.

Universal Studios perfectly combines the traditional theme park with the movie theme, although perhaps with less roller-coasters. If the idea of shows and rides doesn’t take your fancy but you still want the movie experience, you can also do a tour of the Warner Bros Studio. A friend of mine did this instead and raved about it.

You can get your ticket for Universal Studios here. 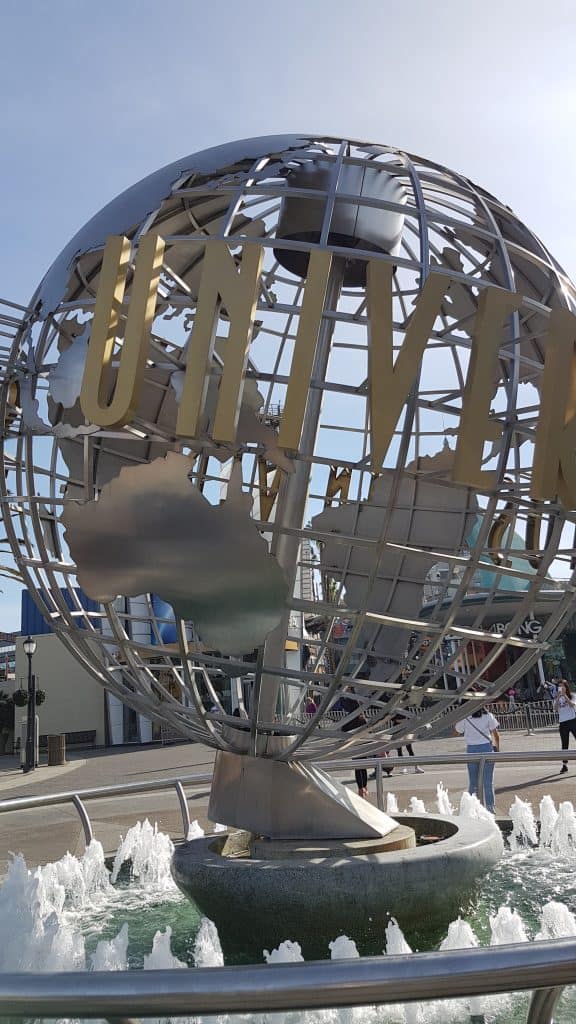 The entire place looks like a movie set. Old New York style buildings house stores and various eateries, and at various interludes throughout the day also performers yelling down their lines to characters and tourists in the street below. Costumed performers mingle in the street with excited tourists eagerly holding their cameras. If you have ever been to Movie World on Australia’s Gold Coast it is like that, on steroids. 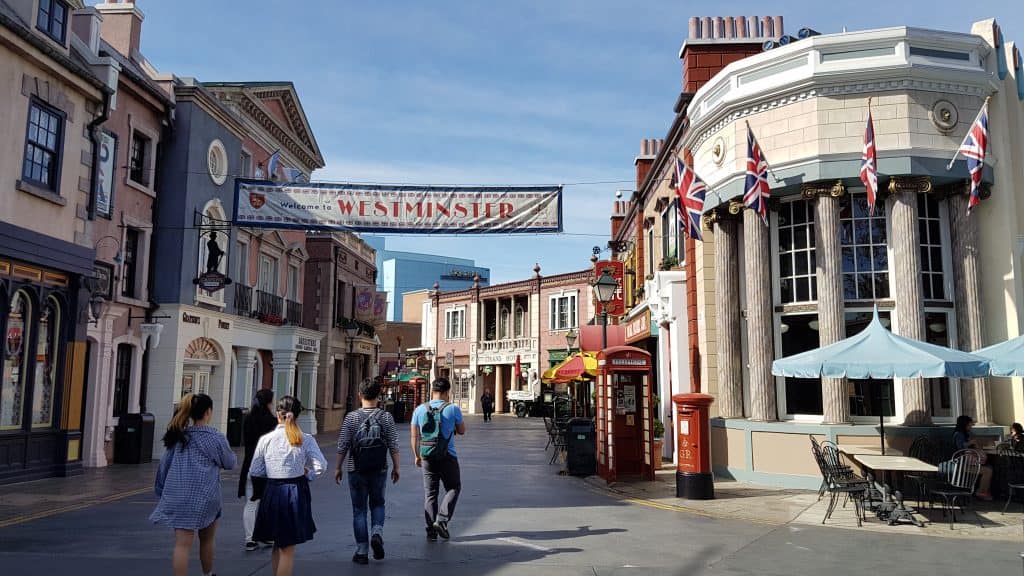 It is also the first time I have seen a theme park with a dedicated single riders line, and this is what makes it a great option for even the solo traveler. The single riders line gets used to fill any gaps in seating from odd numbered groups and I walked virtually straight onto every single ride. It’s a great way to maximise the value you get out of the day. 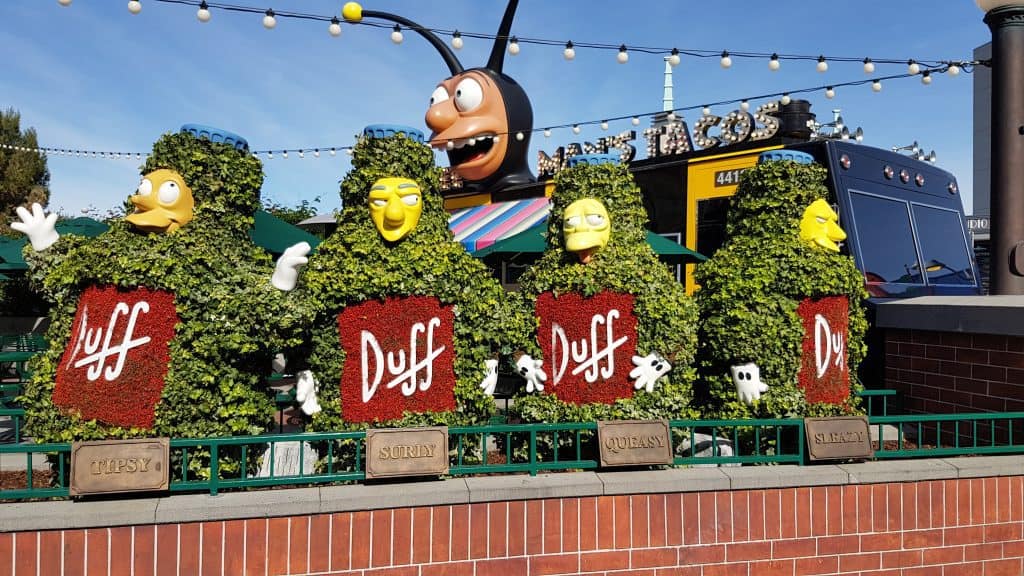 The majority of the rides are a combination of virtual reality and motion, screens showing you the scenes as the car rocks, shakes and moves around you. It is masterfully done, you really feel you are flying through the air on a broomstick behind Harry Potter, or plunging down a massive roller coaster with The Simpsons. I would recommend not eating or drinking before the Harry Potter one, my stomach was actually quite thankful for the fact the ride was on the shorter side. Don’t miss out on trying the Butter Beer in Harry Potter World – it’s delicious! And the store is delightful for fans of the movies.

The longest ride is the Studio Tour, one of only two without the Single Rider line and the longest wait of my day at 30 minutes. It contains a clever combination of experiences and sights, showing the current sets of several shows as well as a standard New York set used in many shows and movies that is just the facade. Sets are flooded on cue to flow water around the train then disappear as suddenly. In the car lot cars from Fast and the Furious, Back to the Future, Knight Rider and Transformers rest awaiting their opportunity to ride again. On the set of Amity from Jaws, Bruce the Great White circles the lake and performs for the excited spectators. A 3D experience created by Peter Jackson himself, of King Kong fighting dinosaurs around the train as it rocks with every blow, and a thrilling Fast and the Furious battle between Dominic’s team and protagonist Owen Shaw. It is the epitome of Hollywood magic. 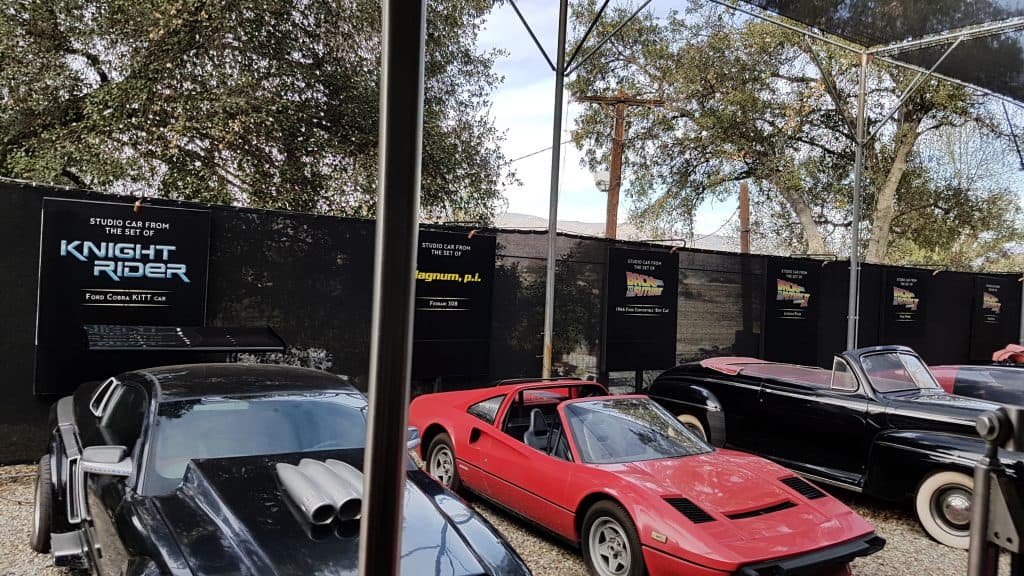 The Jurassic Park ride offers the classic log ride, from which riders walk away drenched, and there are multiple shows on offer throughout the day. The Walking Dead attraction is like walking through the classic Haunted House while zombies leap out at you.

The official Universal Studios app is available to download which shows maps of the park, real time queue information and show timetables. It’s a great way to plan your day and make sure you see and do everything you want to do.

Check the Universal Studios site for up to date information on opening hours.

Universal Studios isn’t too far from Griffith Park so an Uber is likely to be inexpensive.

If you have 4 days in LA, start with the 2 day itinerary, and add these!

Because whats a little getaway without a trip to the beach!

Aged over a century, Santa Monica pier is a Los Angeles icon. It is one of the most filmed locations in LA, and has been featured in movies since 1914, including Beverley Hills Cop, Forrest Gump and Iron Man, and the beach is immediately recognisable from Baywatch. 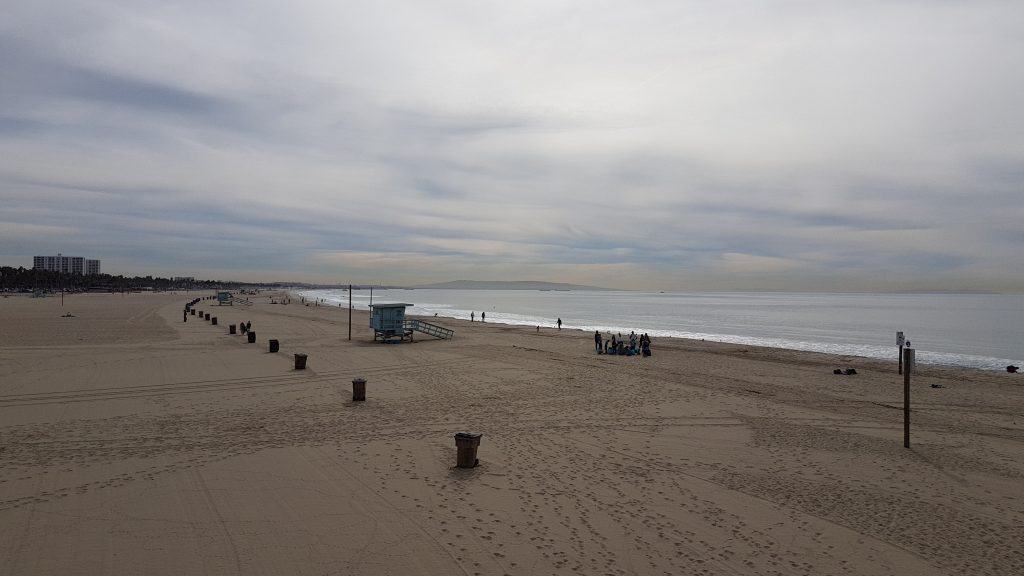 The Pier itself feels like stepping back in time and is at once familiar due to the prominent placement in movies of Pacific Park, a family amusement park located on the pier. It is so long that multiple musicians can busk along the stretch, and their playing doesn’t interfere with each others. 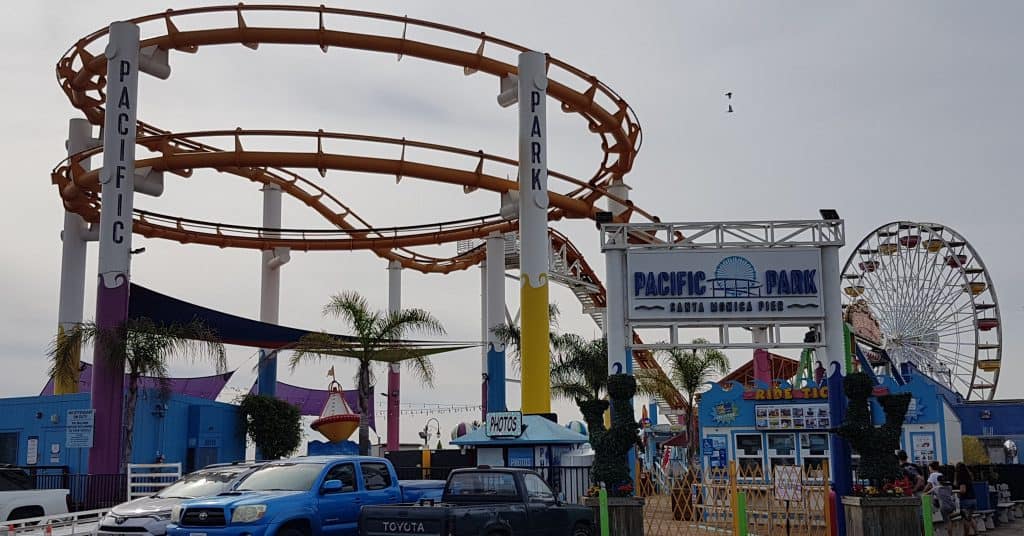 I was content to spend a couple of hours wandering round the pier, park and beach. I’ll always eat seafood if I am by the ocean and scoped out the restaurants on the beachfront for something to take my fancy. But I still ended up back at the pier devouring coconut crumbed prawns at the bar in Bubba Gump, and savouring the first cider I had enjoyed in weeks.

If you are looking for something a bit more organised, and haven’t had your fill of celebrity yet, you can take a highlights of LA tour which will include both Beverly Hills and Santa Monica.

This one is a way out of town so an Uber will set you back around USD$30, so the bus is likely a better choice.

If you’re flying internationally, there’s a good chance that you’ll be flying in the evening or night, so what do you do all day when you have to check out of your hotel in the morning? I know some people like to book an extra night so as to have the room until they leave, but LA has an alternative for you!

The biggest shopping outlet I had ever seen.

Citadel Outlets is home to over 130 top brand stores and restaurants open until 9pm, and it’s the perfect way to spend your final day in LA for a couple of reasons.

First of all, they provide a free baggage check service. So you can pack your bags and check out of your hotel, check them in at the outlet and then shop to your hearts content! Just be sure to leave some room in the case for all the goodies you’ll doubtless pick up.

Secondly, the outlets are in close proximity to the airport, and you can arrange for a shuttle to collect you from your hotel to the outlets, then from the outlets to LAX ready for your flight home.

By Shuttle: Book online to save on VIP packages including transfers between your hotel, Citadel and LAX.

By Train: The LA Metrolink stops near Citadel. Click here for timetable information.

By Uber: This was my choice, it was cheaper overall than the shuttle packages, though I didn’t get the perks of the VIP package. Prices will of course depend on the time of day but the total of my trips came to just over USD$54.

Where to stay in LA

I sought advice from a friend who is an LA local and was advised to look in the quieter part of town around Silverlake, away from the main hub but still accessible. I was dying to try out a tiny house and had a great experience staying in the Cozy Casita. 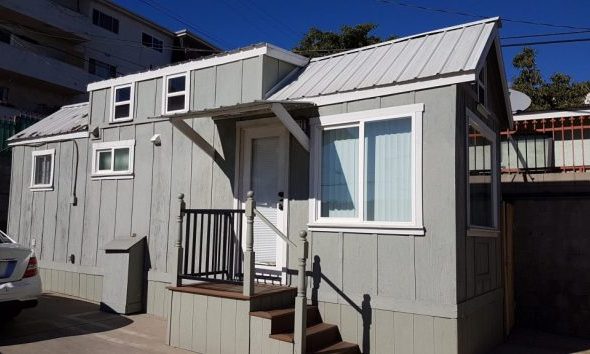 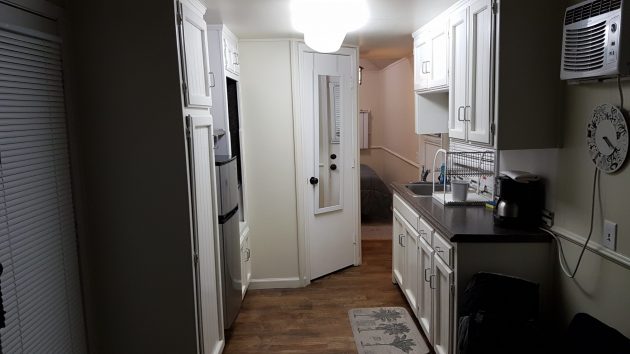 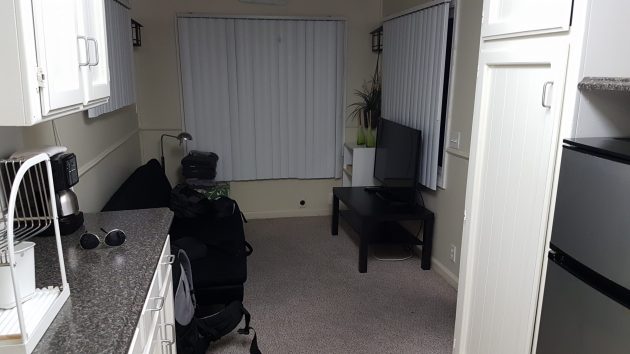 You can check out other options in the Silverlake area below. 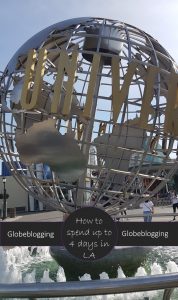 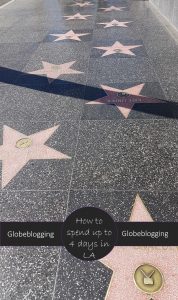