Day 12; A boat, a tarp and Tapado in Livingston

Today the sun is shining and it is pleasantly warm. We have a boat trip planned to a town called Livingston. There we will learn about Garifuna culture and sample a traditional Guatemalan dish called Tapado, made from seafood and coconut milk. Both of which I am a fan.

A boat trip on Lake Izabal

I manage to board the boat without incident, an improvement on my efforts of yesterday which have earned me a corker of a bruise across the back of my thigh reminiscent of the time I caught my leg in the rope abseiling down a rock wall. I take my seat on the side of one of the benches towards the back beside Ruth.

We first trundle pleasantly a short distance from our hotels dock to see the Castillo de San Felipe. The Spanish Colonial fort once protected the port from pirate attacks and sits on the narrowest point of the lake. Tourists are able to visit the fort and walk within its walls, but today we have to make do with the view from our position on the lake.

We go past and turn back again, the motor of the boat put-put-putting, and pause again at a mangrove island in the middle of the lake. I’m not sure it really meets the definition of an island, as there is no land visible just the roots of the mangroves. Great Egrets inhabit the mangroves, the white birds perched throughout the trees. Numerous posts poke out of the water, where new mangroves have been planted to extend the perimeter of the island. The government does not want this island to disappear.

We rapidly accelerate to head for Livingston. It takes me all of five minutes to regret my decision not to bring a jumper or jacket as the air rushes over me carrying fine spray from the lakes surface. I hope for a quick trip.

I put my head down into the wind and fold my arms in close to defend against the buffeting air. Ruth is doing much the same beside me.

It is, however, picturesque. We slow down to look at the rainforest vegetation we’re traveling through, occasionally interrupted by a stilted hut perched over the water, often with a small canoe or boat moored nearby. The huts are clearly inhabited, and are only accessible by the lake. Our driver says there are freshwater crocodiles here and I keep my eyes peeled on the waters edge searching for a glimpse. He says they don’t come around to the more densely populated part of the lake, but it doesn’t sell me on the idea of swimming. We emerge around the corner onto a wide part of the lake they call the mirror, reflecting the jungle and sky onto its still surface.

The soggy drizzle which has been falling becomes more emphatic.

It is entirely miserable by the time we’ve returned to the main part of the lake to continue speeding on our way. We are all drenched, the boats roof offers minimal defense. Ruth huddles on the floor in front of our bench, using the bench in front as a barrier from the rain and spray coming from the front. I’ve considered the same, but she’s a little smaller than I am.

I hear a rustling and something is passed over my head. Someone tells me to grab on.

A tarp has been passed over by the driver, and is being stretched over.

I clamp my left hand against one of the poles fixing the roof to the boat, pinning down my edge. Around me the others are doing the same, the ones in the middle holding it above our heads. The wind still floods through weakness in our defenses, the tarp flaps and billows noisily around my ears. But we’re dry.

And we must look utterly ridiculous. A boat speeding down the lake, twelve people huddled under a flapping black tarp, a driver standing at the back. I cannot help but laugh at the image and the others join me. We may look ridiculous but we’re dry and we’re having a great old time! 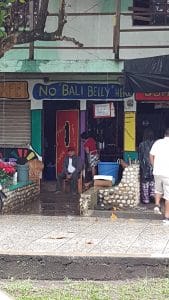 The boat eventually slows and the tarp is pulled back to reveal Livingston. It looks much the same as Rio Dulce, though perhaps more of a fishing village. On our way through town Dani ducks into a local store to see if they have any ponchos for sale. Rain is expected the rest of the day and most of us aren’t wearing anything waterproof. Dani speaks rapidly in Spanish. They have no ponchos but they remove large garbage bags from under the counter and cut along both sides. Dani measures these up against us and rips a hole for our heads. Our raincoats cost five Quetzals. I am wearing a garbage bag. It only adds to the overall ridiculousness of the day.

Dani leads us to the spot at which we will be meeting ‘the professor’ who we’ll be spending time with today. The professor is a music teacher, who teaches the Livingston children about their Garifuna history and culture through music and dance. It not only keeps the culture alive, but it keeps the kids off the street and out of trouble. It’s a term I’ve not heard before, Garifuna are the mixed race descendants of African, European and Caribbean people. They have resided in Central America since the 1700’s.

Some local children are playing soccer with a slightly flat ball on a basketball court nearby. We watch them smiling and laughing and running around, and Shane joins in the game. I notice an older child waving what appears to be a gun around on the other side of the court, several of the others have too and we exchange wide-eyed looks. He points it at another child and I am relieved to see it is a toy.

A child arrives and leads us to a nearby set of steps. At the top is a small room with a number of children. They are surrounded by bright colours and instruments, predominantly drums of various shapes and sizes. We are invited to sit around the room. I end up behind a large drum.

The professor is perhaps in his early 30’s, and would fit right in back home in his black jeans, red flannelette and a black beanie. Five local boys of varying ages wearing shorts and t-shirts sit around him with instruments, two of them drums that sit on the floor. Another boy has two turtle shells strung around his neck which he hits with a stick. Two other boys have what appear to be some kind of Maracas. There are also two girls, one older and one younger, dressed in the brightly coloured local dress.

The professor and the boys demonstrate the Garifuna music, while the girls take turns in dancing both solo and with some of the boys. They are incredibly cute. Then its our turn to learn some beats, and we all shuffle around until everyone has access to an instrument. The professor demonstrates and instructs which beat he’d like us all to play. We all seem to get the rhythm and hang of it fairly quickly, with a few giggles to punctuate.

And then the professor demonstrates the dance and I watch closely. It is largely based on hip movement driven from the knees and is pretty close to one of the Samba steps, which I am not actually any good at largely due to my inability to master the basic step at anything resembling speed. Some of the other steps however I can do, including the one close to this. He gets us all up on our feet and we jostle for the limited floor space.  Latin dance starts on the right foot, so I have to consciously keep thinking about starting on the left. The kids grab some of us to dance in the middle of the very crowded room. The young girl grabs my hand.

Time flies by and all too quickly it is done. We leave some money in the tip jar to help the professor keep working with the kids.

The restaurant looks like it has been thrown together from leftovers and scraps. There’s a good chance it has. The rain continues to bounce on the roof of corrugated iron as we strip off our coats and garbage bags. 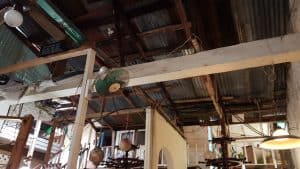 I order both the local specialties; the Tapado and a Coco Loco – a fresh young coconut cut open with rum added. The rum in mine is not overpowering, but some of the others find theirs very strong. The Tapado is essentially a soup. It comes with a full fish on the plate beside it, scales, head, eyes and all.  It doesn’t take much digging to discover that the soup contains every bit of it’s seafood ingredients too. At first

I extract the bits of tails, and fins, and shells, but eventually I give up and just scoop the liquid from the bowl. Despite its plethora of non-edible contents it is incredibly tasty.

My garbage bag offers surprising defense against the cold air on the boat trip back, once I have wound it tightly around me to seal the gaps. The tarp is passed over my head once again. It is pulled back as we travel through a picturesque canyon and we don’t bother putting it back up again. 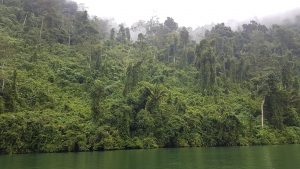 The afternoon passes at the Tortugal bar. An ever expanding group appears for the ridiculously cheap cocktails and we play dominoes into the evening. 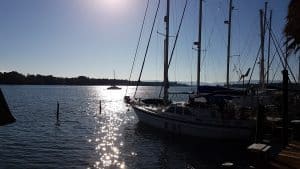 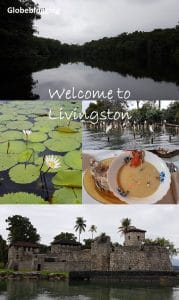 3 thoughts on “Livingston; the Guatemala Garifuna”