4am hurts even more than 4.30am. More so because that was our actual departure time, my alarm actually went off at 3.20! Today we depart Antigua for another Guatemalan destination, the waterfront Rio Dulce.

We are speeding through the countryside in a minivan with a cracked windscreen. At least it has seatbelts. On both sides of the road mountains loom stern and foreboding, dotted with patches of green, many tops concealed by cloud. The side of the road is a rotating landscape of trees, fields, houses and locals hopeful of selling their produce. It is still only 9am.

The litter strewn along the road is a sad indication of human presence. We have passed actual vultures picking over it on several occasions. They are sometimes joined by the odd dog. Large boulders sit beside the road where their downhill force has come to a rest. Landslides are common, especially in wet season.

The road is single lane each way and there’s a lunacy to overtaking. Cars poke noses out from lines of traffic on a regular basis, choosing their moment and flooring it into the lane of oncoming traffic for as many vehicles as they can. There is also a courtesy present. As soon as a car appears heading towards the overtaker, the overtakees make space for you to move back in, with often a honk exchanged to indicate gratitude. We’ve had so many close calls with oncoming vehicles, getting out of the way just in time. Every time it happens the Australians on the bus exchange wide eyed looks and shake our heads with a nervous half smile.

We’ve just passed a couple of properties with children’s clothes hanging on the fence along the road. I’m unsure whether this is taking advantage of a sunny location or some form of giveaway or exchange.

Other than a stop for a tasty breakfast with not so tasty coffee, and a couple of toilet stops we’ve been driving all morning. Our guide, Dani, has warned us that Rio Dulce is not a safe town. Other than organised group activities we’ll be staying in our hotel. All we know about our hotel is that we reach it by boat.  We’re not going straight to our hotel, since it is still early we’ll be dropping off our luggage in Rio Dulce and going to a hot springs another 45 minutes drive. Its around 1pm when we get to Rio Dulce. After watching our bags loaded onto a boat we are led to the local supermarket to purchase a picnic lunch of sorts.

Supermarkets sell alcohol here. My backpack contains the wine from days ago so I pass it by with merely a glance. I’m amused to see my deodorant under a different brand name. Good to know I can replace it if I run out. There are a few tourists milling around, most of the people we see appear to be local to Rio Dulce. 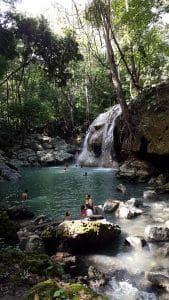 I pick out some fruit and other snacks for lunch and some large chips to share while the other members of the group pick out assorted food and drink. They make you buy your plastic bags. At the bus our group leader has secured an eski filled with ice and we pile in our drinks.

Finca el Paraiso is a private property and we pay a small fee to enter. Children linger around holding their hands out for coins, but we are advised not to encourage this behaviour. Despite the eski’s weight the local guide hefts it onto his shoulder. We change and use the toilet before we set off on the path through the jungle to the spring.

The path is ridiculously slippery and I’m thankful for the grip of my sneakers when some of the others slide about in their thongs. The final set of steps are installed into the path, and the railing is a saviour on the damp wood.

At the bottom of the steps the spring comes into view. Water rushes over a wall of rocks landing with a roar in the pool below. A number of people are swimming or standing beneath the falls. On first glance it appears that mist is rising from the falls as they hit the pool below, but it is actually steam.

Volcanic activity heats the water rushing over the rocks at Finca el Paraiso  below the ground. It falls into cool water below, creating a refreshing place to take an afternoon swim. Sitting under the falls is like taking a hot shower, while hovering a little distance away is like sitting in a warm bath. The water becomes cooler the further the distance from the falls. I’m not much of a water baby but the spot is irresistible, and I clamber over the slippery rocks to plunge in behind the others. It is a remarkable sensation, moving through the chill water growing gradually warmer, until you perch on the rocks below the falls letting the hot water pour over you on its journey down. 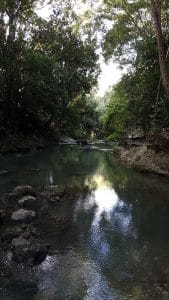 A young local man shows Shane from our group a series of three caves under the falls, and persuades him to climb to the top and jump off. A few locals jump in the time we are there. My heart breaks for a stray dog hunting round for scraps of food left behind or dropped by visitors. She is skeletal and clearly feeding a litter and we are all distressed by seeing her. The guide keeps shooing her away. We have nothing nutritious to give her but we slip her what we can when the guide isn’t looking. By the time we pack up and leave a chill has arrived in the air. 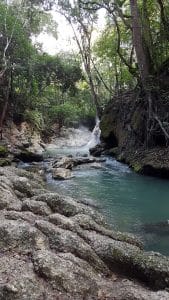 Our Rio Dulce hotel for the next two nights is called Tortugal. Dani has talked it up as being the best accommodation of the trip. It is only accessible by boat on the shores of Lake Izabal. The hotel will be the only option we have to eat, but we are reassured that the food is good. When we get there we find it really is quite exquisite. With my exceptional coordination I manage to catch my leg on the rope attempting to climb out of the boat. I fall ungracefully onto the seat behind me to a chorus of uproarious laughter from Shane, who extends his hand to help me out on my next attempt.

The whole place has a rustic Robinson Crusoe desert island castaway feel to it. A series of huts and buildings all built with wooden logs with a tin roof. It is literally on Guatemala’s largest lake, Lake Izabal, the main dining and recreational area extends over the waters edge on stilts. The huts are spread around the property. Shane is in the honeymoon suite, stashed out in the jungle.

The hut Ruth and I have is closest to the water off to the side of the restaurant building. It contains two luxurious queen beds, a small bathroom and our own deck looking out over the water with a hammock stretching from one side to another, along with a 2 seater lounge and coffee table. The floor in the room is concrete which extends into the bathroom. The shower has concrete walls and a drain dropping straight to the ground below. The shower is the best since Mexico City, although it is fixed to the wall and unable to be adjusted. A great height for Ruth, but for me not so much, and I have to bend my knees to wash my hair. A strip of something like chicken wire runs between the walls of the hut and its roof. The wire runs the full perimeter of the hut and is about 20cms in height. Hence the hut is unable to be entirely closed off from the elements outside. Lucky its warm, especially given there are only sheets on the bed.

As promised the restaurant is very good, although the coffee not so much and I am missing the coffee from Fernando’s in Antigua. Tortugal has no TV and no music. Guests entertain themselves with conversation, admiration of the sun reflecting off the lake stretching before them, or with the collection of board games available off to one side. There is a resident very large and drooling dog by the name of Heffe, who is never far from the restaurant, and a couple of tiny cats who appear from time to time that Ruth and I pat at every opportunity.

If you’re in Rio Dulce and seeking more adventure, a day trip to Semuc Champey is well regarded. 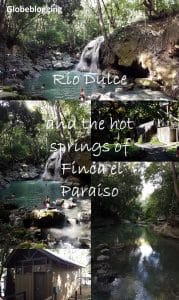 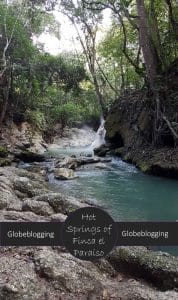