There appear to be no discernible road rules on the cobblestone streets of Antigua. Or at least, none obvious to a foreigner such as myself. Right of way appears to be straight, at intersections vehicles seem to take a gap when it comes. The town is busy today. Cars queue to turn down streets and pedestrians wait for a pause to dart between them. They dodge the motorbikes, sometimes carrying three people, also seeking the gaps to weave between. Honking the horn appears to be the signal to indicate someone can go through.

The rides in cars and shuttles are equally hair raising. Few people seem to wear seatbelts, when they are even present to wear. You cant help thinking if there’s an accident you’ll be a goner. But I haven’t seen an accident yet. Despite the way they drive, the chaos seems to work for them.

I am on my own this morning. It is sadly Ruth’s turn to be unwell due to the dinner she had without me. She has gone back to the hotel to rest in the hope of being up to the Pacaya Volcano tour which we have booked for this afternoon.

I have also booked myself into a tour of a coffee plantation for tomorrow. The travel agent has given me the best map I’ve seen yet and I am miraculously able to find my way around with it. If you come to Antigua do yourself a favour and get one of these first up! I’ve actually been able to intentionally find the chocolate museum. This took me past the first actual bottle shop I’ve seen and a store selling soaps so divine they smell good enough to eat. I’ve bought a bottle of rose Moscato (since they don’t seem to do sparkling wines here) for this evenings volcano viewing and a couple of soaps, though I’m not sure whether these will be gifts or I’ll hold onto them. I find Central Plaza which Antigua’s streets are designed around.

I don’t have time for messing around finding something for lunch so I head back to familiar Fernando’s. While attempting to locate Ruth’s direct route back to the hotel I get lost, again. Not having the time to go wrong I backtracked and flagged down a motorcycle taxi, bumping and bouncing all the way back to the hotel. I arrived with 20 minutes to spare before the scheduled volcano pickup.

Ruth has been lying down all morning but valiantly rallies to come along. We are waiting out the front of our hotel as directed ten minutes ahead of schedule. Naturally the pickup is on Guatemalan time and well behind schedule. Given our experience with tour pickups in Mexico City I ring the agency to confirm the booking. The bus pulls up about two minutes later.

It’s not very full but as is often the case this is just one of the pickup buses and we have to change to a final one. The next is overfull and I end up on the dicky seat folded out from the second-last row. It is woefully lopsided and I spent the next hour and a half sitting at an awkward angle, trying to brace my body to stay as straight as possible. Naturally there are no seatbelts!

When we get to the Pacaya volcano we pay another fifty Quetzals to enter the park, this goes towards maintenance of facilities. The Guatemalan government declared 5,489 acres National Park in 1963. While the trails in this part are safe, it is not permitted to traverse them without a guide. Horses stand around with men holding their heads, repeatedly offering us a ride up. It is fresh but not unpleasantly so, and the hike will keep us warm.

Ruth unfortunately has to turn back a short time into the climb, as despite her hopes she hadn’t really been any better. She had told me on the bus not to wait for her, so once I have managed to communicate with someone who tells me she is safe I push on.

The walk is three and a half kilometres each way. I’m no stranger to a challenging hike, and I train with seven kilometre runs, but this was a completely different matter entirely, which I can only put down to the altitude. We were only ascending three hundred metres from our starting point, but that was already 2300m above sea level!

I tried to break only when the guide stopped but as we got higher I had no choice but to stop more frequently just to catch my breath, my lungs heaving to get enough air into them to push my body on. There were spectacular photo opportunities for Agua volcano part way up. As we neared the top my breath fogged with the plunging temperature and I felt cold in my t-shirt. It was a huge relief to walk over the last rise and see the fences marking the perimeter of the top.

The top of Pacaya Volcano

Unfortunately, we were now in the clouds and couldn’t see a thing! And it was freezing cold! There was no evidence of the promised sunset. Check out this post catching the sunset and checking out Pacaya’s lava in clearer weather.

We were led down another hill to a jagged black landscape I have seen before, in New Zealand. Our guide tells us this is the lava flow from the 2014 eruption. The rocks are sharp, and shiny in places, and the group carefully clambers over it posing for photos.

We were led to a part of the lava flow where heat still rises from the ground, and offered sticks and marshmallows. I leapt at the chance for a sugar hit more than anything, not having had time for snacks beforehand, and not having anything in my bag. We all genuinely attempted it, rotating our sticks around the fissure but the best I achieved was a slightly gooey outer.

By this time the light was disappearing. I don’t see well at night and I hadn’t brought my glasses. I was anxious to start the climb down.

The journey does go quicker, but before too long I was forced to flick on the torchlight of my phone to light my way. Even in daylight care would have been required, as the ground slipped and dirt slid away from under our feet. The dark added a whole other degree of difficulty. I reflected that this was probably not the most sensible thing I had ever done. The whole way down I tried not to think about what might happen if I fell. A view of the lights of San Vicente glowing against the darkened sky rewarded us towards the bottom. Back at the bus I make sure I am on board in time to get a stable seat. Ruth has spent the duration huddled in the rangers room watching TV in Spanish.

Clearly, I made it in one piece, my legs shaking from the exertion and sweat pouring off me despite the cold. This was my second volcano hike, the first being Greece, and it was a dramatically different experience. I can honestly say it was one of the most physically challenging things I have ever put my body through. It was all I could do to muster the energy to pack when we got back to our hotel around 8pm. There was no chance Ruth and I would be drinking that wine! 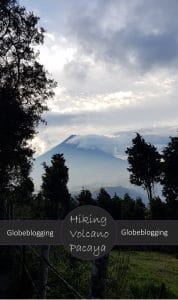 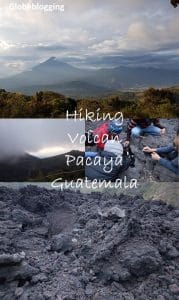 5 thoughts on “A Pacaya Volcano Tour; a Volcano Pacaya hike”