The instant I heard of Monarto Zoo I knew I would need to go there. While I am not generally a fan of zoos, Monarto Zoo is somewhat different. Open range, or open plains zoos are generally in more rural locations, and contain less animals than their city counterparts, but spread over a greater land expanse. They offer a different experience than that of observing wild animals confined to miserable small enclosures. Monarto is the largest open plains zoo in the southern hemisphere and one of the largest in the world, stretching over 1,500 hectares. The Zoo is home to over fifty species of native and exotic animals, all of them with a space to roam. This is a concept which sits much more comfortably with me. It is one of the best things to do in Adelaide and definitely one of the best zoos in Australia.

Both Adelaide Zoo and Monarto Zoo are owned and operated by an independent conservation charity, and they play an important role in the preservation of a number of species through breeding and repopulation programs. They have reintroduced species previously extinct in the wild, such as Przewalski’s Horse, and Monarto is home to some species actually classified as extinct in the wild, such as the Scimitar-horned Oryx, as well as critically endangered species such as the Black Rhinoceros.

This post contains affiliate links. Making a booking or purchase through these links comes at no additional cost to you and is a great way to show your support for this site.

Tickets are available from the entrance to the zoo, online or from the ticket office at Adelaide Zoo.

I was equipped with a half price ticket from my visit to Adelaide Zoo the previous week. A two zoos pass works out to save money if you intend to visit both zoos. Alternatively adult entry Monarto Zoo prices are currently $36.

How to get to Monarto Zoo

I planned my visit for the first day of my drive between Adelaide and Melbourne, even though it was a considerable diversion from my route. While it seemed to me an easier and more practical thing to do by car, LinkSA offer a bus from Adelaide that runs from Monday to Friday. The Zoo is open daily from 9.30 to 5pm.

After about an hours drive from Adelaide I reached the gates of the Zoo, located in the Murraylands region shortly after 11am. The following kilometres of dirt road had me wondering if my insurance covered misadventure by Rhino. Eventually I reached the actual entrance to the zoo.

A map is available online or at the ticket office. While I spent much of the day wandering the ten kilometres of walking trails, eventually the heat of the day drove me to catch the Zu-Loop bus, the only way of accessing some areas of the zoo. Naturally this is the only way to see the carnivores on the property, the passing through gates and wire fences an experience reminiscent of a scene from Jurassic Park. I am not the only one on my bus to make such a comparison. Most of the property is relatively flat, so the walking trails are not difficult.

Monarto Zoo offers a variety of different experiences with the animals, allowing you to get up close and personal with Meerkats, Giraffes, Cheetahs and Chimps, and can help the keepers care for and feed the animals. These naturally come at an additional cost which may be prohibitive to some visitors.

A great alternative to these are the keeper presentations that run throughout the day at the enclosures, allowing visitors to learn more about the animals at no additional cost. Scheduled times will be provided on entry or are available online for planning your visit.

While it doesn’t perhaps have the range of animals you might find at a city zoo, there are still plenty to see, and the design of the zoo itself in some instances enables better views and photographs of the animals than you would find at a city zoo.

On my visit there were a number of the animals I didn’t get the opportunity to get close to, but the ones I did were definitely worth it!

Monarto is home to a total of seventeen Cheetahs and has a successful breeding program in place. During the Meet the Keeper session visitors will be introduced to Kwatile, who was born at Monarto as a single cub. The keeper explains that Cheetahs require multiple young in order for their milk production to be stimulated, so Kwatile would not have survived if the decision was not made to raise her by hand. She is a massive animal, that was no more than a couple of metres from where I stood on the platform. Yet she weighs only 32 kilograms in order to allow her to reach speeds of 80 km/h in just three seconds. Watching the big cats it isn’t difficult to see a resemblance in behaviour and manner to the domestic house cat.

I have to admit, even though I am an avid cat lover, Meerkats have to be one of my favourite animals. Both Adelaide and Monarto Zoo enable you to get quite close to them in their enclosures, and have the opportunity to take some great pictures.

Monarto has a mob of six siblings, and they are much smaller than you expect they would be. Part of the Mongoose family, their diet comprises of insects and they live in large family groups in the wild. They are inquisitive by nature, evident by their well known lookout posture, and will climb to get good vantage points to survey for predators. 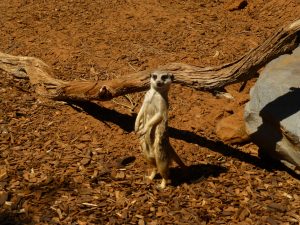 A troop of ten Chimpanzees currently live at Monarto, including two juveniles born on the property. There is an open and closed part to their enclosure, during my visit the juveniles were in the closed section so I was only able to photograph them from behind perspex, but a number of the adults were happy to play in the sunshine for watching visitors. Chimpanzees have demonstrated they are highly intelligent and are our closest living relative, sharing over 97% of human DNA. 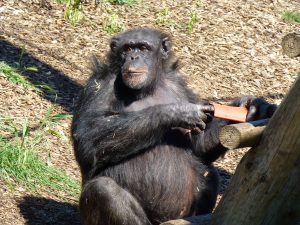 The Giraffes are a definite highlight of a Monarto visit!

The female Giraffes share a massive enclosure with a number of other animals, including Zebras, but really, it’s all about the Giraffes! A large platform is built on the edge, just the right height to bring you face to face with the curious Giraffes. They are used to the audience, and are fed near the platform, so will hover nearby. The male Giraffes are separated from the females and located in another part of the zoo. Visitors can meet the males on the Giraffe experience.

Monarto has the largest Giraffe herd in Australia, and is also the most successful Giraffe breeding institution in Australasia, producing over 40 calves. The most recognisable is a female named Kinky, so named for the evident kink in her neck which the keeper explains happened when her mother sat on her shortly after her birth. It doesn’t appear to bother her at all, and she is not shy about approaching the platform to get a closer look at her watchers. 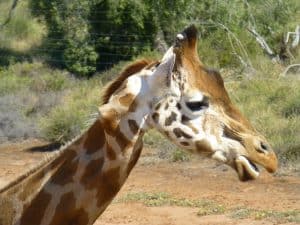 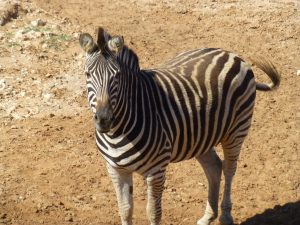 Monarto is home to five adult White Rhinos, of which two of the females are mothers to a further five calves born at Monarto.

Rhinos grow very rapidly during their first six months of age, adding two to three kilograms of weight every day. 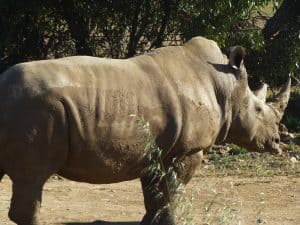 Naturally they don’t allow you to get up close with the lions, so my photography opportunities were limited by what I was presented on the bus driving through their enclosure.

Monarto has one of Australia’s largest lion prides with nine adults. The males are housed separately while the females have the reign of the drive through enclosure. 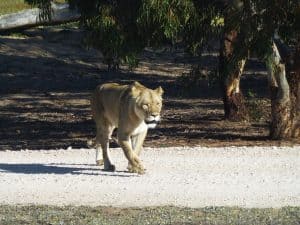 I was running out of daylight by the time I finished the bus ride, and decided to call it a day. From the vantage point of the bus I saw a number of other animals, but unfortunately from afar. There is definitely enough to see at Monarto Zoo to fill a day.

On the suggestion of the clerk at my accommodation when I checked out that morning, seeing I was so close I drove the additional twenty minutes to see the Murray River before I continued on my road trip to Melbourne.

Looking for more? You can check out my other recommended best day trips from Adelaide.

Like my photos? These were taken on an older model point and shoot Panasonic Lumix with a Leica lens. The latest model features an amazing 60x zoom! 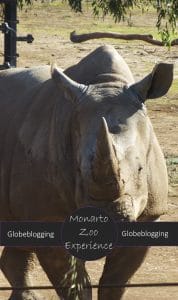 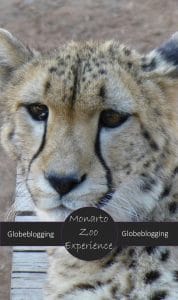 5 thoughts on “The Monarto Zoo Experience”