Today we farewell Belize and its delicious lobsters and spend much of the day in transit to Tulum, Mexico. Not all days are created equal just as not all days can be jam packed with as much fun as others.

Today is one of those not so fun ones.

We are on the 8am water taxi from the island to the mainland. Its much cooler this morning so we all make a beeline for the downstairs interior. This proves to be a wise choice when people from the top level start coming down the stairs to squeeze in downstairs wherever they can, in varying stages of wetness. One woman’s hair is dripping. At some point water starts running along the bench seat on the side where most of the group are seating. I shift forward but its like shutting the gate after the proverbial horse, I have a wet arse.

An hour later and we’re pulling up to the dock at Belize City. Collecting my bag reveals that when putting the padlock on the bottom section of my backpack I only put it through one of the zippers, rendering it not only a pointless exercise but leaving my zipper to open, which is exactly what it has done. My towel was closest to the top and it’s still there, hopefully all of my underwear and socks still are too or I could need to go shopping once I hit Mexico!

At the Mexico border I forget to sign my entry form and the official sends me to the back of what is now a very large line. I want to yell with frustration and the injustice, it would have taken me two seconds to sign the form in front of him, but you don’t want to give them any reason to further make life difficult for you. My group gives me sympathetic looks but I’m sure the delay is a pain in the arse. He must have taken pity on me though as he called me back down after a few more people had gone through.

The customs section is empty when we arrive and they have to start up the machine to scan our bags through. They also have the same system I saw entering Guatemala for inspections. You collect your bag from the belt and are directed to push a button that has two lights above it. A green light you get to carry on, a red light means your bag gets checked. One of the group collects her bag quicker than me and goes ahead. She gets a red light. Mine is green. I’m relieved it is her and not me. Not that I think I would have anything of concern, but there are some things they could potentially challenge and my bag would be a nightmare to repack in a hurry. They had a good rifle through the bags of the four members of our group that got a red light.

It’s a nice comfortable bus with plenty of space for this next leg, thankfully since its such a long journey. We stop off at a lovely place on the lake for lunch where some of the group have a swim. I’m content to peruse however, and enjoy a banana nutella crepe for dessert! 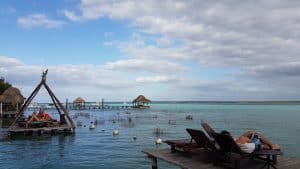 Its pretty much 7pm when we pull into our Tulum accommodation and Ruth and I were pretty impressed with our room. It was ginormous, with a spacious bathroom and a king and queen bed. And the bed was super comfortable! Others didn’t find their rooms quite so impressive.

We walked the ten minutes into town for dinner. It’s unbelievable how many dogs are tearing around, I’m nearly barrelled over by one. But they all seem to have road sense. I’m keen to hit the shops tomorrow and check out some of the stores we’ve passed. Just for something different we have Tacos for dinner. They’re basic but pretty tasty. Some of us arrange to meet up for a trip to the ruins of Tulum tomorrow given its a free day.

After a long day of traveling we’re all pretty beat and head for our beds early, for us anyway!

The morning finds us once again walking into town for a prearranged breakfast with those of us heading to the ruins, most of us as it turns out. A glorious free day stretches before us! The limited Spanish most of us, including myself, know proves insufficient to communicate the finer details of our order, but fortunately our French group member is far closer to fluency, even though she would deny it. The breakfast special is an omelette with a juice included and most of us order some variation of this with a coffee extra. The coffee’s ok, but I still miss Guatemalan coffee.

Most of the girls choose to hire a bicycle for the day from the hire place near our hotel, as I can’t actually ride a bike (yes I know how, it’s a brain injury/balance thing) I chose to get a taxi out to the ruins, and Fiona and Helena elected to join me. While the others arranged their bikes the three of us walked over the road in front of the hotel to the shopping centre, where we figured there would probably be somewhere we could get a taxi. The one we found quoted twenty pesos to take the three of us. While this seemed an extraordinarily good deal and we all jumped at it, by the time the taxi dropped us off he was asking us for two hundred pesos. Between the three of us it was still pretty cheap though, and we couldn’t exactly argue with him. It was just fortunate we were carrying enough cash.

In any case, we had safely arrived at the Tulum Mayan Ruins.

By this time, you’d probably think that all the ruins are starting to look pretty much the same, and to an extent you’d be right, but the Tulum ruins are unique in that they are built literally on the coastline. The ruins against the backdrop of the ocean colours makes for some spectacular photos. The city is also known as Zama, meaning dawn, so named for being one of the first places dawn breaks in Mexico. It was a commercial port for the Mayans that served as a redistribution point for products coming from Central America, the gulf and Central Mexico.

The ruins are open every day from 8am to 5pm and entry is around forty pesos. It does get pretty busy though, so best to get out ther early to beat the crowds. Waiting at the entry gate we see a group of Coati in the trees. Once inside the three of us wander our separate ways, agreeing on a meeting point for later.

One of the first things I notice is that there are Iguanas, literally everywhere! Seeing these is a first for me and I regularly snap away with the camera. 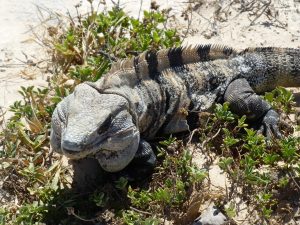 While the path around the city offers many photo opportunities, none are perhaps quite so picturesque as the Temple of the Wind God standing on the edge of the cliff face. These specific temples are identifiable due to their circular shape when viewed from above, rare in Mayan architecture. 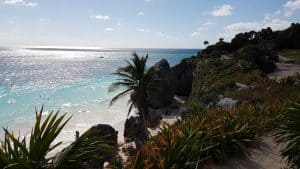 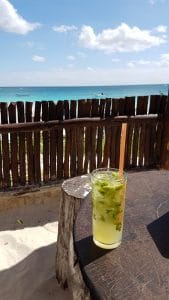 After spending some time wandering Tulum, I rendezvous with Fiona and Helena and we decide to walk along the road that leads to the ruins, populated with hotel after hotel, and find somewhere to enjoy a cold drink in the heat of the afternoon. We find many of them are quite exclusive and deny us entry but finally find a glamping site. It is populated with a number of large tents for rent, and a quaint makeshift kitchen built into a hut-like structure. With no electricity, drink and food choices are limited to what can be mixed by hand or cooked over a fire. We enjoy a number of cocktails and a light meal.

Rather than get a taxi back to our hotel we decide that it didn’t really seem that far when we traveled there, and decided to walk. It took us the best part of an hour!

I pass the rest of the afternoon strolling the streets in town perusing the stores, and while I was tempted by a lovely colourful hammock the reality of transporting it home made it seem rather unpractical. I returned to the hotel empty handed.

Thinking of visiting Tulum? Check out these tips to travel Mexico on a budget! 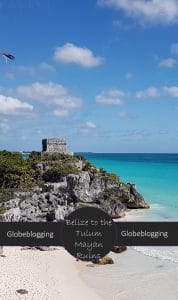