I know, you’re thinking what is a castle doing in New Zealand, a country not exactly known for an anglo history dating back to the time of castles. Well I thought the same.

Of all of my research on Dunedin attractions, and any recommendation I got, was that Larnach Castle was one of the best things to do in Dunedin.

Located on the Otago Peninsula, Dunedin is a derivative of the Gaelic term for Edinburgh, Scotland’s capital. It was settled by the Scottish in 1848 and many Scots emigrated to the city between 1855 and 1900. It became a wealthy city during the Otago gold rush in the 1860’s. (Source: Wikipedia)

Today it is the second largest city on the South Island, after Christchurch. 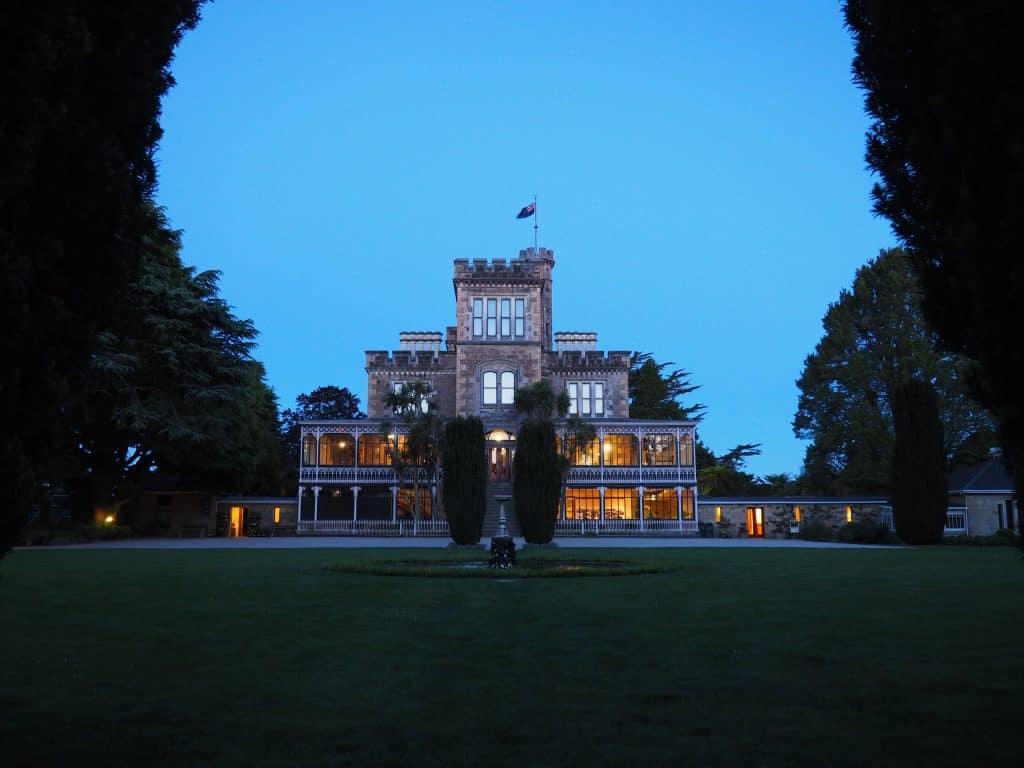 William Larnach arrived from Australia in 1867, after his appointment to the position of the Chief Colonial Manager of the Bank of Otago. He and his son discovered the site with its spectacular panoramic views of Otago Harbour when out walking one day, and William purchased the land in 1870. Over the next 16 years he oversaw the building of the castle, designed to rival the country homestead of his uncle in Sussex. While the plans for the castle had originally come from England, they were substantially altered by the Scottish architect R.A Lawson, who melded the Gothic revival fashionable in Britain at the time with the fashions from the Australian colony. The Australian influence is evident in the iron lace verandahs which surround Larnach’s home. 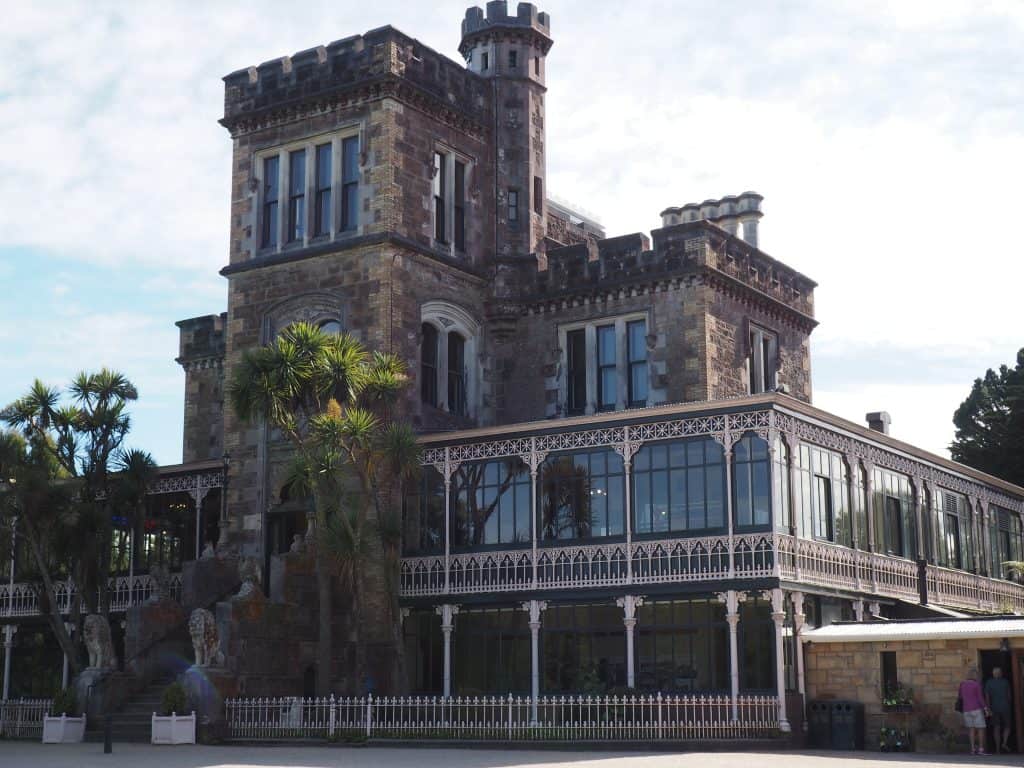 New Zealand at the time was still a far off colony, so materials for the construction were brought to the site from all around the world, including woods from Australia and North America, slate from Wales, iron from France, Venetian glass and bricks from Marseilles.  These were sailed into Otago Harbour and pulled to the site by ox drawn sled. Most of the stone was obtained from Otago. Craftsmen came from Europe to apply their skills in wood, stone and plaster to the construction. 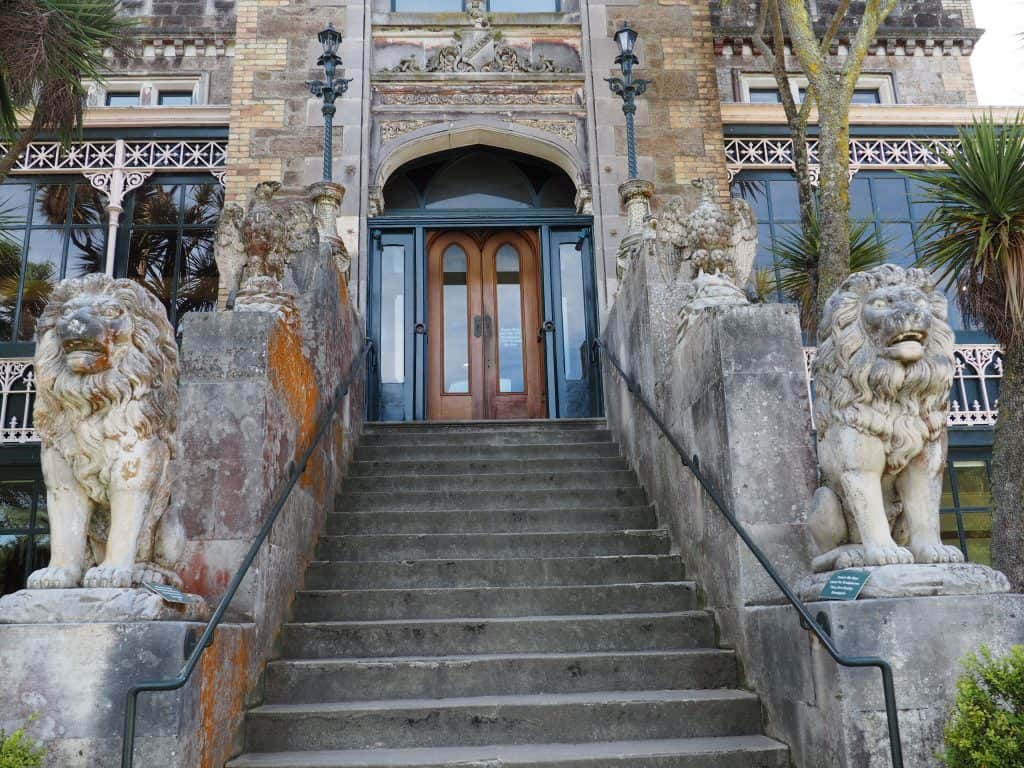 William moved his family into the castle prior to the completion of the interior, and the self-sufficient household entertained many guests, including four future Prime Ministers.

In the time before his death by his own hand  in 1898, William was married three times, his first two wives and eldest daughter all passing away. After legal battles between family members the property was sold in 1906.

In the following years the castle had many owners and uses, including as a lunatic asylum and a hospital. It fell into disrepair and was near ruined when it was purchased by the current owners, Barry and Margaret Barker, in 1967.

The Barker’s began a process of restoring the castle and neglected 35 acres of grounds to their former glory. Margaret hunted down original woodwork and furniture which had been sold over the years and returned it to the castle. While the restoration is ongoing, almost every room in the castle has now been returned to the original standards of William Larnach’s vision.

Larnach Castle is now the premier tourist attraction in Dunedin.

Where to find Larnach Castle

The castle is located at 145 Camp Road Dunedin, which is about 10 minutes out of the main town. You can follow the signs without too much trouble, although GPS will be beneficial getting through Dunedin.

Why you should visit Larnach Castle

If you love grand old buildings and gardens Larnach Castle will definitely appeal to you. With spectacular views over the Otago Harbour from both the grounds and the castle tower it is a lovely place to walk around, and stop for a coffee or high tea in the cafe located in the castle ballroom. The gardens themselves have been rated a Garden of International Significance. You can also walk through the majority of the castle itself and see the restoration in progress or completed and furnished according to the style of the time. 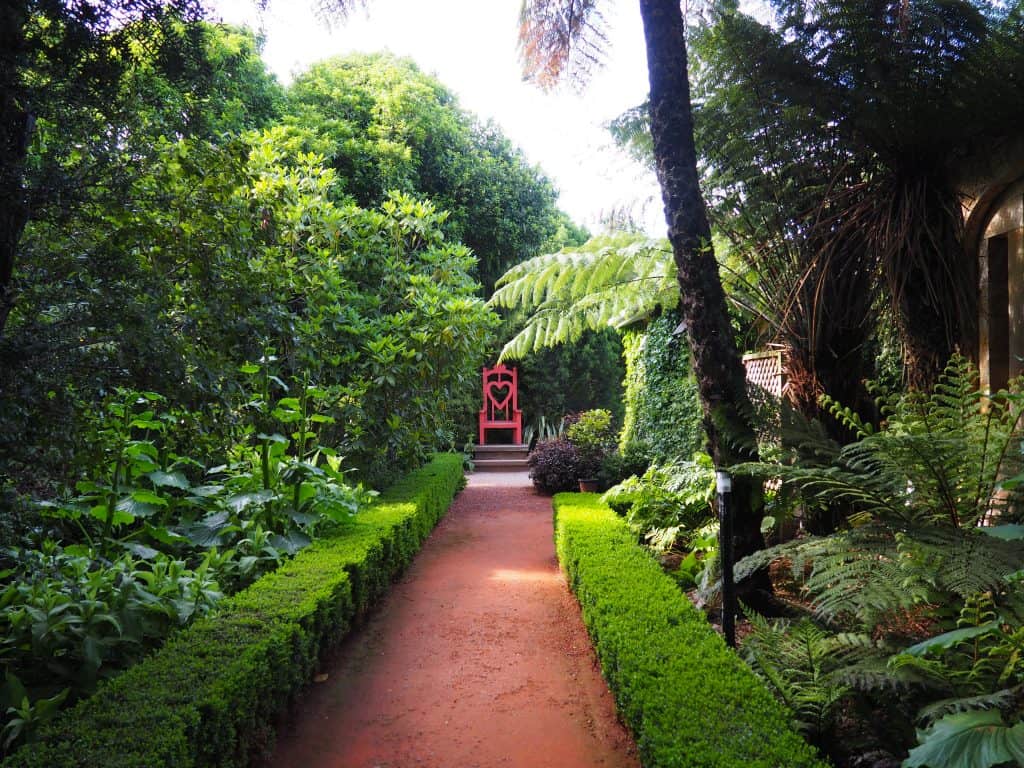 You can arrange a private tour for $200 per guide or just opt for the 45minute audio tour at reception when you arrive. I was content to wander round the castle and grounds myself. 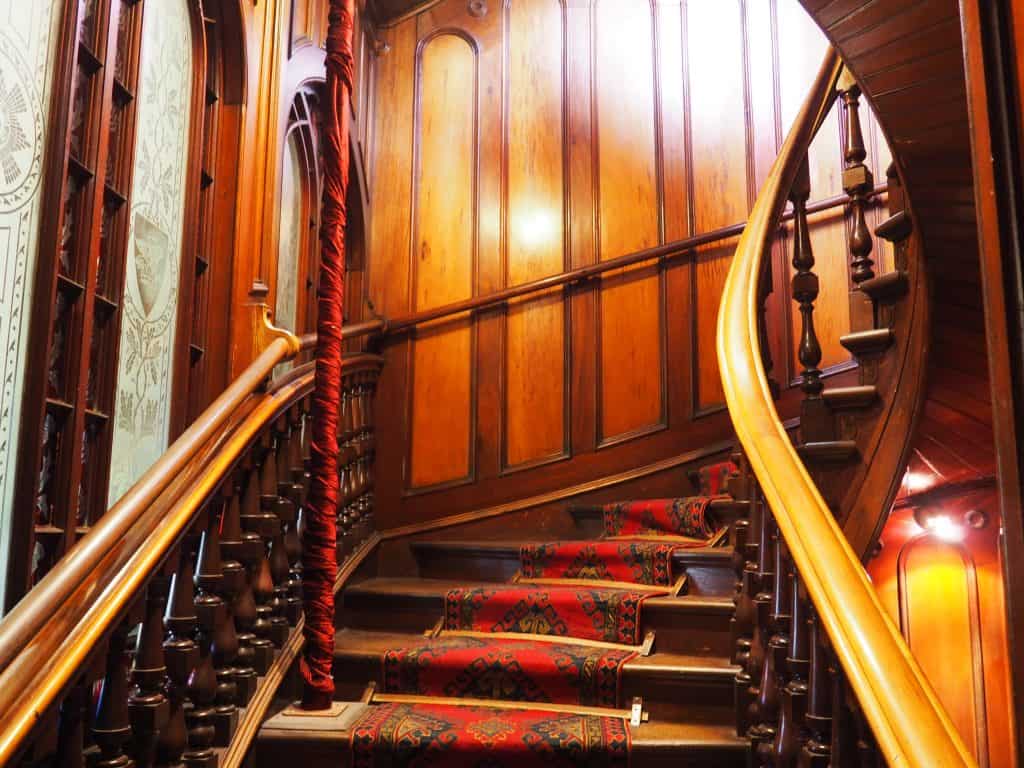 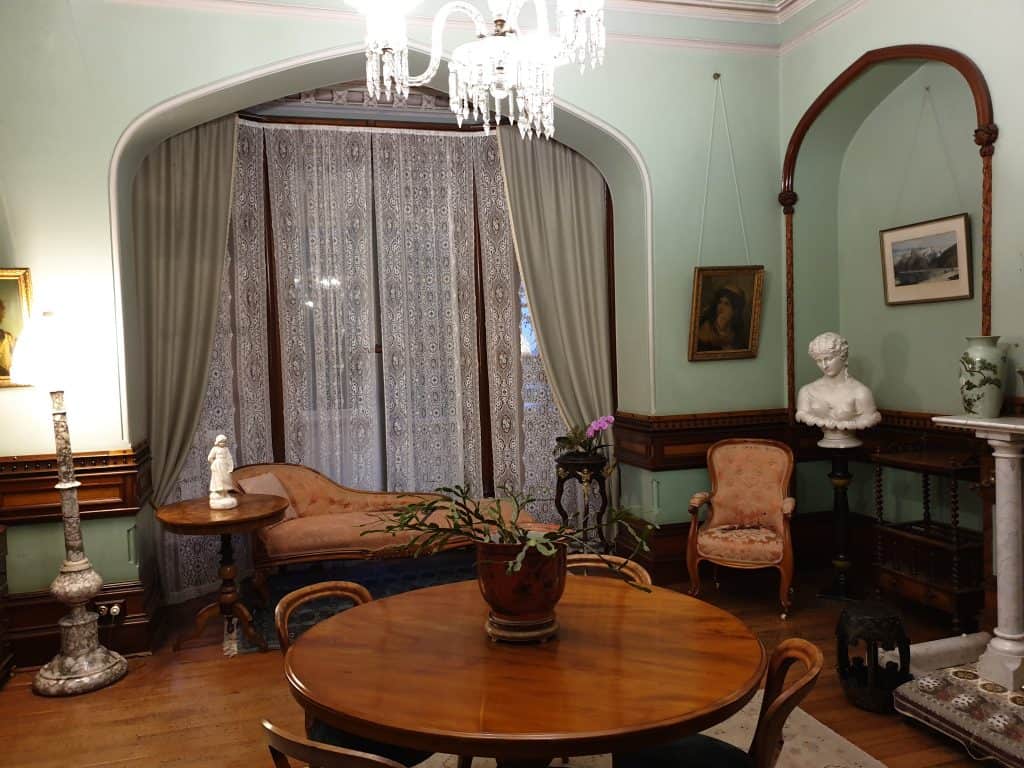 Don’t miss the chance to check out the Harbour views from the tower.

To gain access to the castle, gardens and grounds, purchase your tickets online from around NZ$34 per adult and NZ$12 per child over 5. A family pass for two adults and two children can be purchased for NZ$80.

Tickets for access to the garden and grounds only are NZ$17 per adult and NZ$5 per child over 5.

Larnach Castle is open all year round from 8am to 5pm.

The castle grounds are open from 9am, and last admission is 7pm from October to March and 5pm from April to September.

I was keen to stay in unusual accommodations when I could, and Larnach Castle was already on my must do list, so when I discovered while researching Dunedin accommodation that you could actually stay at the castle, it was a no-brainer for me! Staying at the castle will also include full entry to the castle and grounds and the advantage of enjoying the grounds outside of the hours they are open to visitors.

You can’t stay in the actual castle itself, but there are a couple of options on the grounds.

The option for the budget conscious, the 140 year old stable building has been converted into six rooms with shared bathroom facilities. A buffet breakfast and selection of cooked breakfasts is included in the stay and served in the hall on the ground level, which also features a guest lounge, internet station and a display of the original horse stalls. The rooms were clean and very comfortable and while they were small rooms, I found there was plenty of space.

Custom built beside the stables on the castle grounds, these rooms will set you back more than double the cost of a stable room. They also include breakfast in the stables.

Book your Lodge or Stable stay.

The estate is a country house containing five bedrooms, located 500 metres from the castle gate. It is considered the luxury level of accommodation.

Book your stay at Camp Estate

While open to non-guests May to August, if you are staying on the castle grounds this is a must do! Bookings are required and orders are required to be placed by 5pm on the day of your dinner to enable the chef to prepare the food. The menu can be found online.

The three course meal is NZ$80 per adult and NZ$27 per child, and includes one free beverage. Dinner is served in the castles dining room at 7pm and numbers may be limited. There were seven guests the night I dined and both the food and service were exceptional. The menu uses local seasonal ingredients so dishes on offer will change regularly. 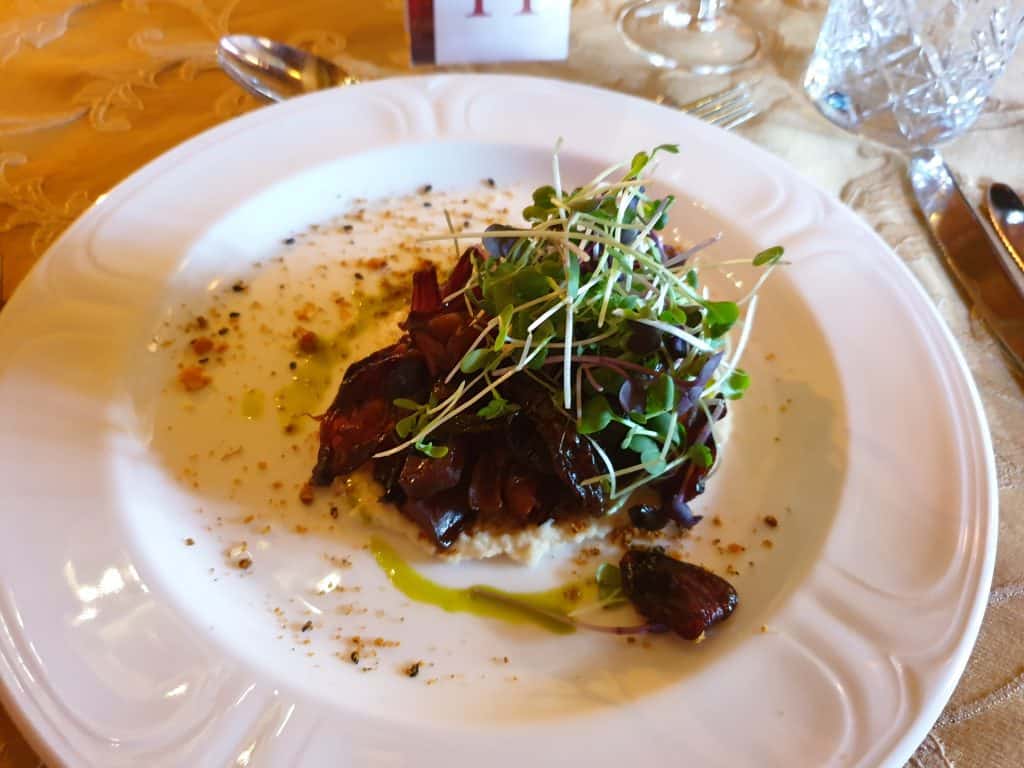 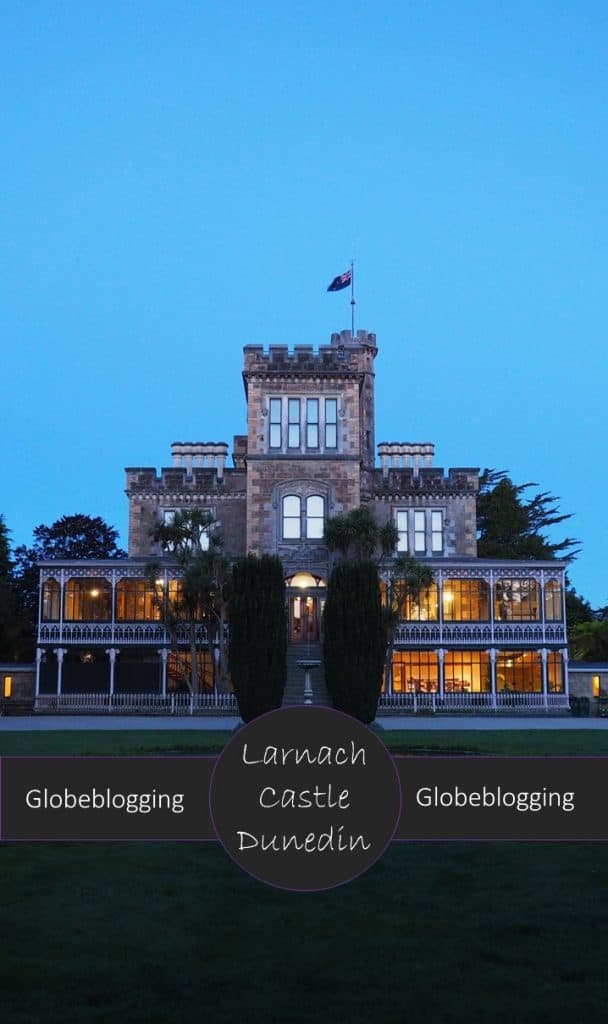 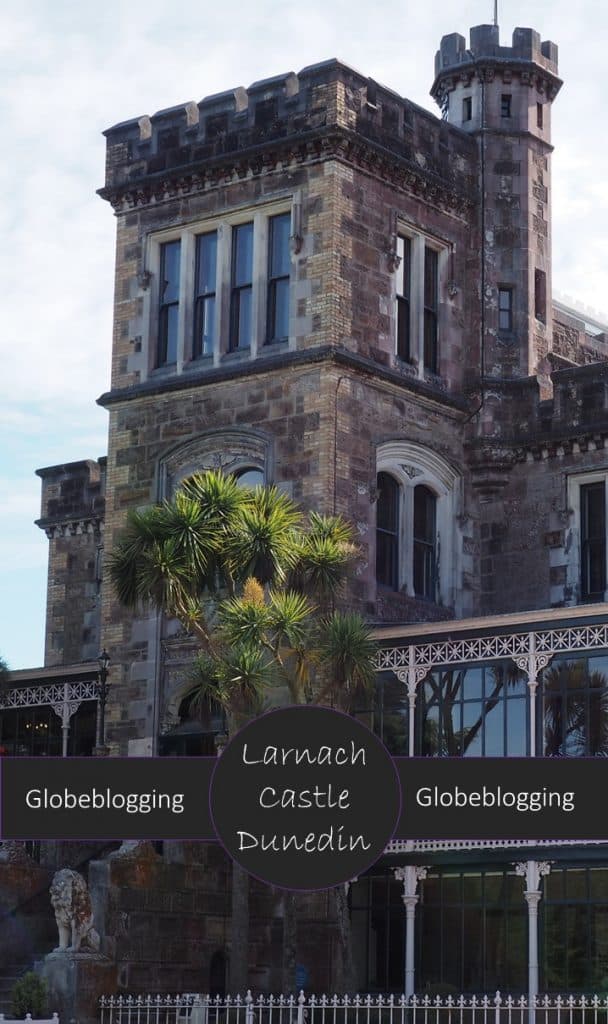