I think I was asleep almost as soon as I turned out the light and I awoke full of beans and ready to explore Mexico City. Given local time was 11pm at night though it didn’t seem like the wisest idea. The king bed we’re sharing is amazingly comfortable and staying in bed isn’t a bad alternative.

Outside the sanctuary of our room the morning proved to be colder than expected. The chill air from the front door washed by me in the courtyard as I ate breakfast. It drove me to seek warmer clothes and reminded me that despite the warmer days, it is winter here.

A chatty NZ tourist had mentioned to us last night that Mexico City didn’t really get moving until after 10am and when we ventured forth this proved to be the case. The street looked like an average street.

By the time we emerged from the Temple of St Francis of Asissi the street resembled the busyness we had encountered before. It was worse than a Sydney peak hour – all day. We had no real plans for the day other than to explore the city and wandered the garden of sculptures by Salvador Dali next door to the temple before we rejoined the crowd. 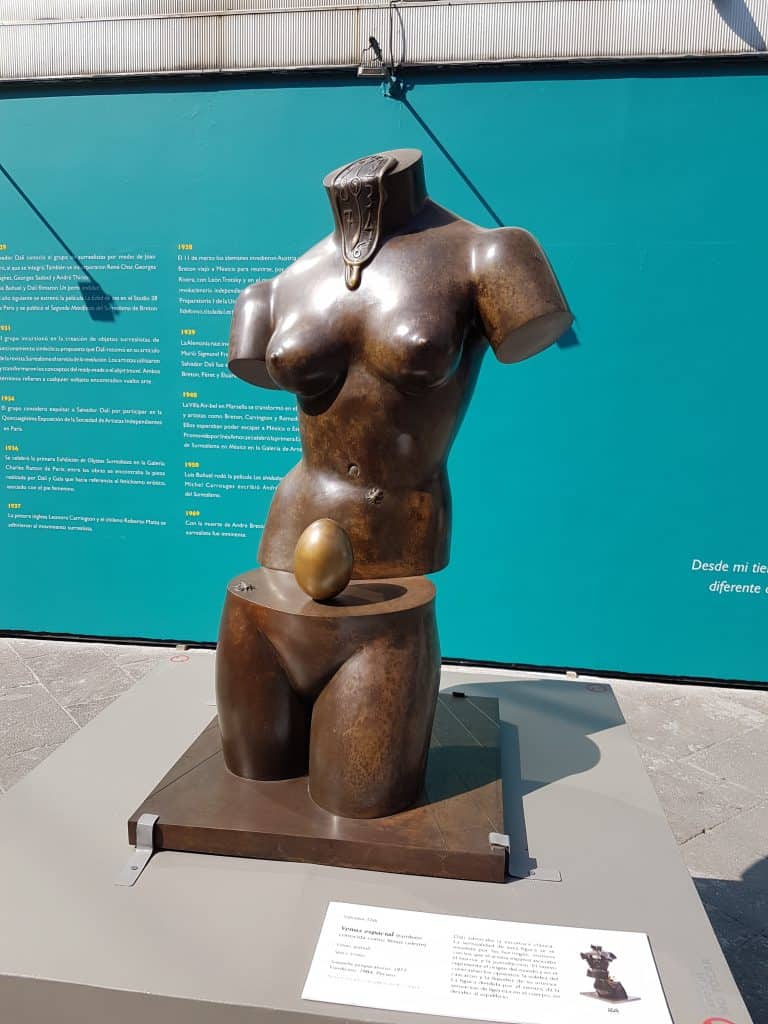 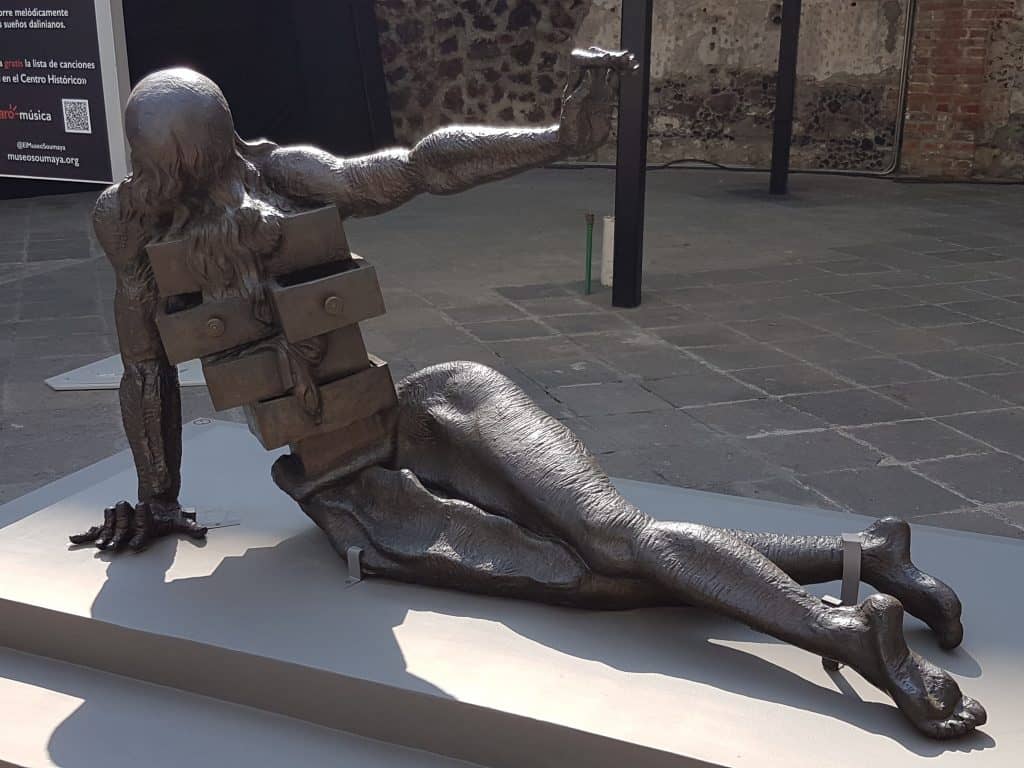 There are police at every major intersection, despite the existence of perfectly clear traffic signals. Their whistles overlap the strange trilling of the flashing green pedestrian crossing man. At the first hint of either the crowds surge forward like a singularly focused hive-mind leaving you no option but to move with the flow. You barely have space to put your heel in front of the other toe and it takes swift manoeuvres to extract yourself from the stream.

We took a walk around the Fine Arts Palace, currently showing a traditional Mexican folk ballet for which we’re hoping to get tickets and strolled through the markets behind it.  Some unique gifts tempted me, until I moved to the next stall and found the same merchandise repeatedly appeared, indicating its true mass produced origins.

At the metro station we scratched our heads and pondered how the fares worked, a puzzle for another day, before meandering through Alameda Central Park, a green oasis in the middle of Mexico City’s bustle. 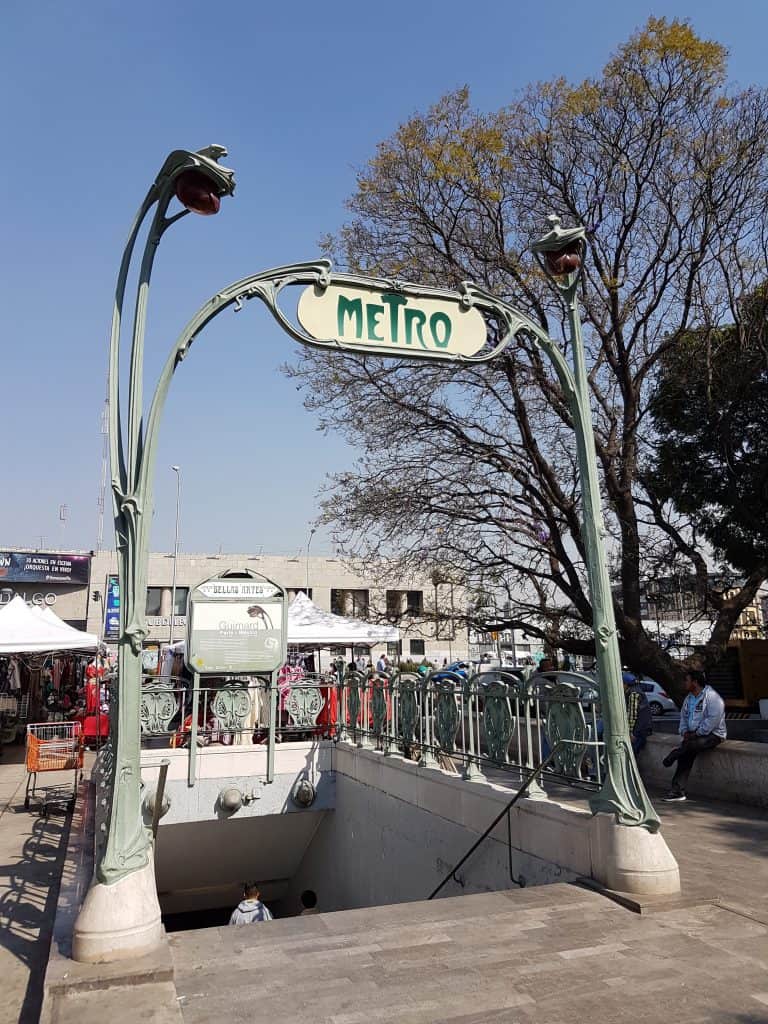 In search of the Cathedral of the Assumption, written to have exceptional views of the city, we walked to the other side of the Historic district. Unfortunately both bell towers were closed to the public for renovations and we had to be satisfied with wandering the spacious interior instead. 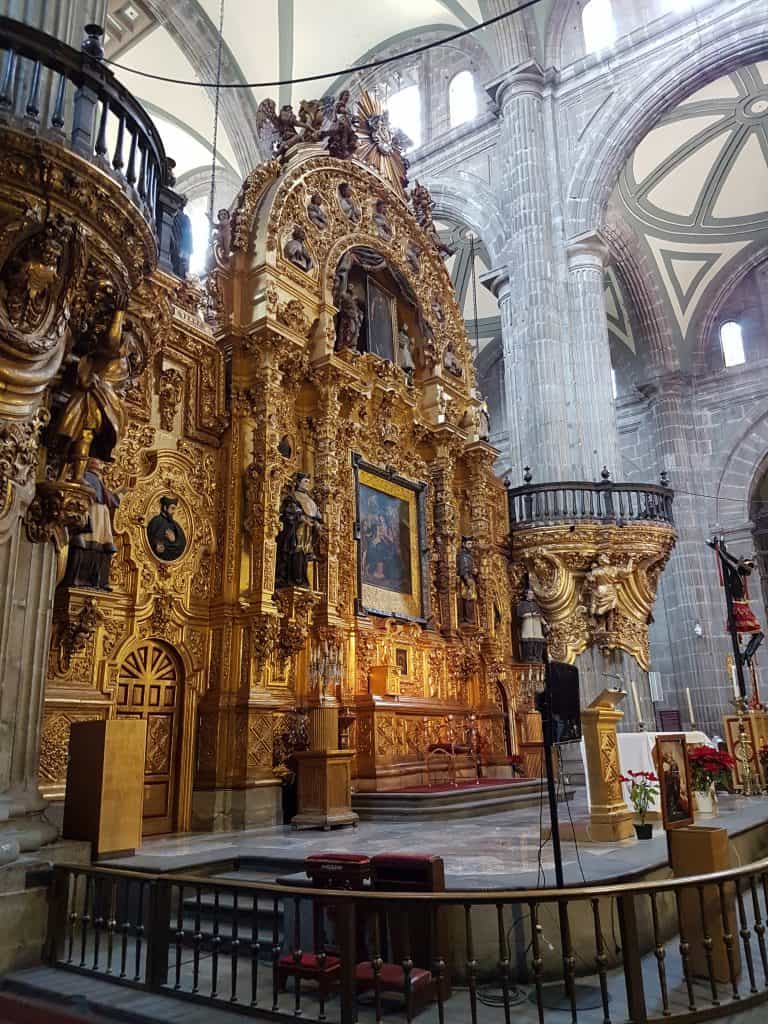 A man on the street attempted to sell me a Spanish newspaper. I shook my head and said ‘no Espanol’ with a smile, which he returned and said brightly ‘welcome to Mexico!’ The streets are full of voices calling out in Spanish. People thrust cards and pamphlets as you go past trying to lure you into their restaurants or stores. I politely decline most, but one made me double-take as I realised he was selling freshly squeezed orange juice. He responded fifteen pesos to my ‘Cuanto questas?’  I nodded ‘Si’ and was handed a large cup of fresh juice for less than $1 US.

The efforts I made to learn some basic Spanish are coming in useful. I have uttered ‘Cuanto questas’ often today. Though being a gringo with limited Spanish has the advantage of being genuinely blank when bombarded by people selling something! It is unfortunate the lack of English translations on the labels in many of the museums limited my experience. 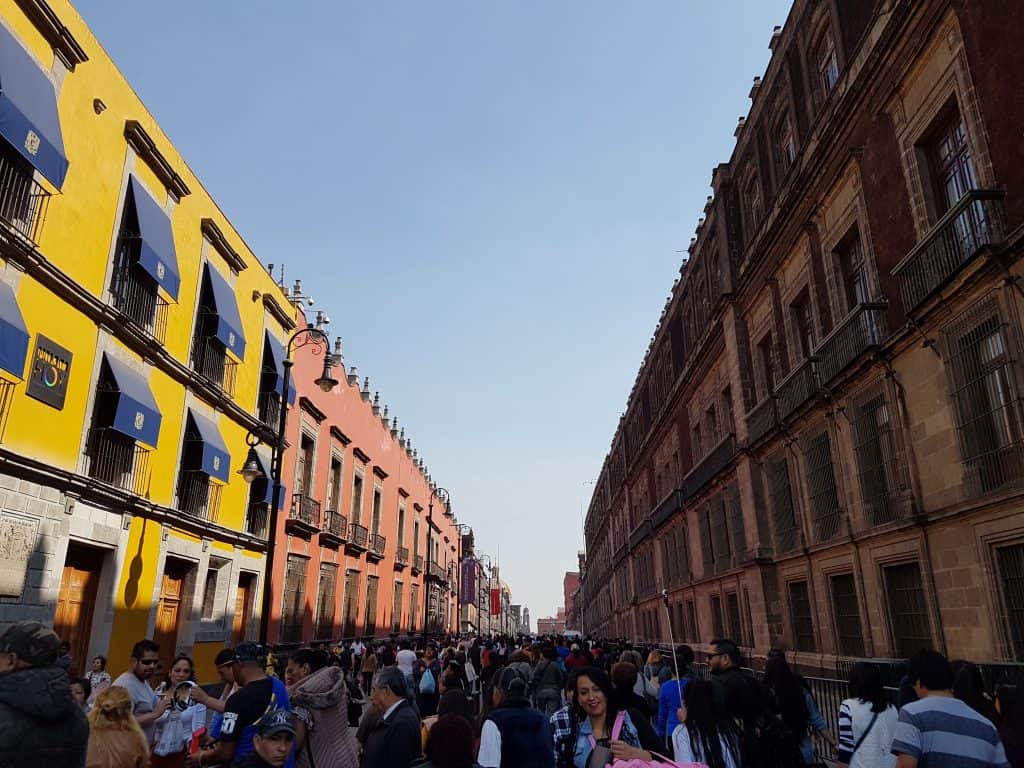 I am again reminded of Manila, which occurs to me makes sense as both were Spanish colonies. Much of the architecture reminds me of a roman influence also, perhaps it is the prevalence of the catholic cathedrals. The number of street performers, especially at night, is also reminiscent of my time in the Philippines. 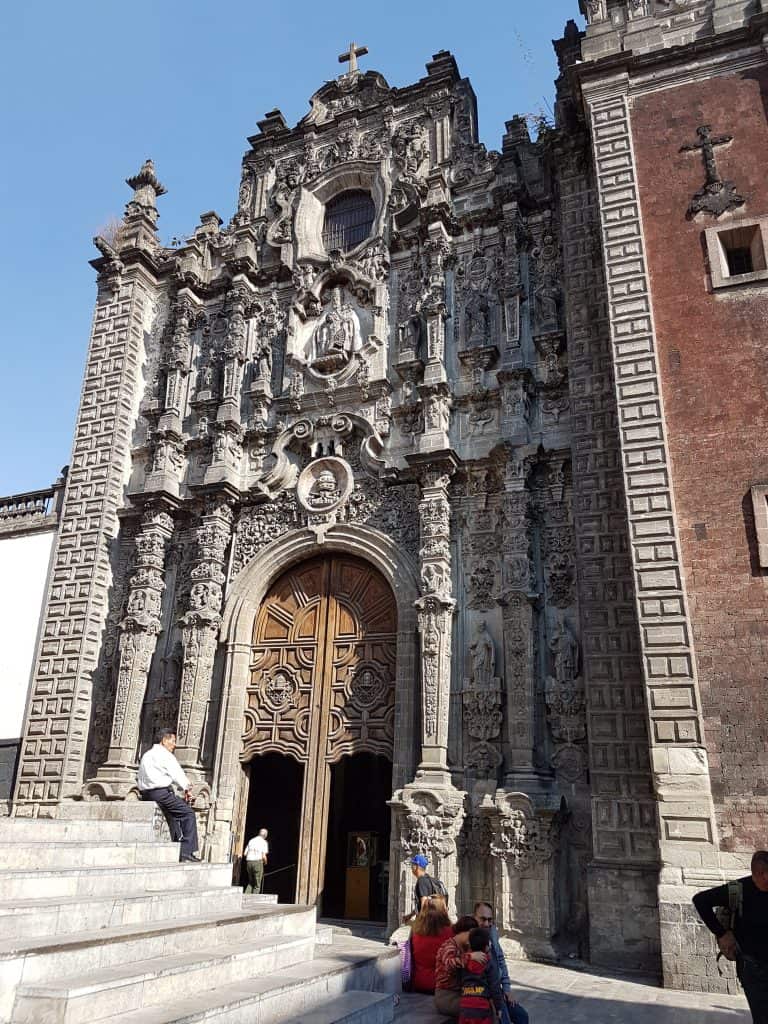 On the other side of the Cathedral of the Assumption, we find a stretch something like a stormwater drain with beautifully painted walls and stalls lining the sides of the street. While we seem to be walking away from the main hub of the city there are still plenty of people around, but we turned back because we wanted to get to the tower in the other direction. When I describe this spot to locals Ruth and I met a few days later they told us with wide eyes we had been in the black market – where anything you could imagine is sold and quite a dangerous part of town. Whoops!

They seem to have a museum for everything here; Cultures, Photography, Caricatures, Economics, Art, and Remembrance and Tolerance to name a few. We ventured into a number of them. A young girl with impeccable English interviewed us for her school project at the old palace of the Archbishop. Her father beamed with pride while filming her, not understanding most of what we said. Then our aching feet sent us in search of the Latin America Tower for its 360 degree views of the city. 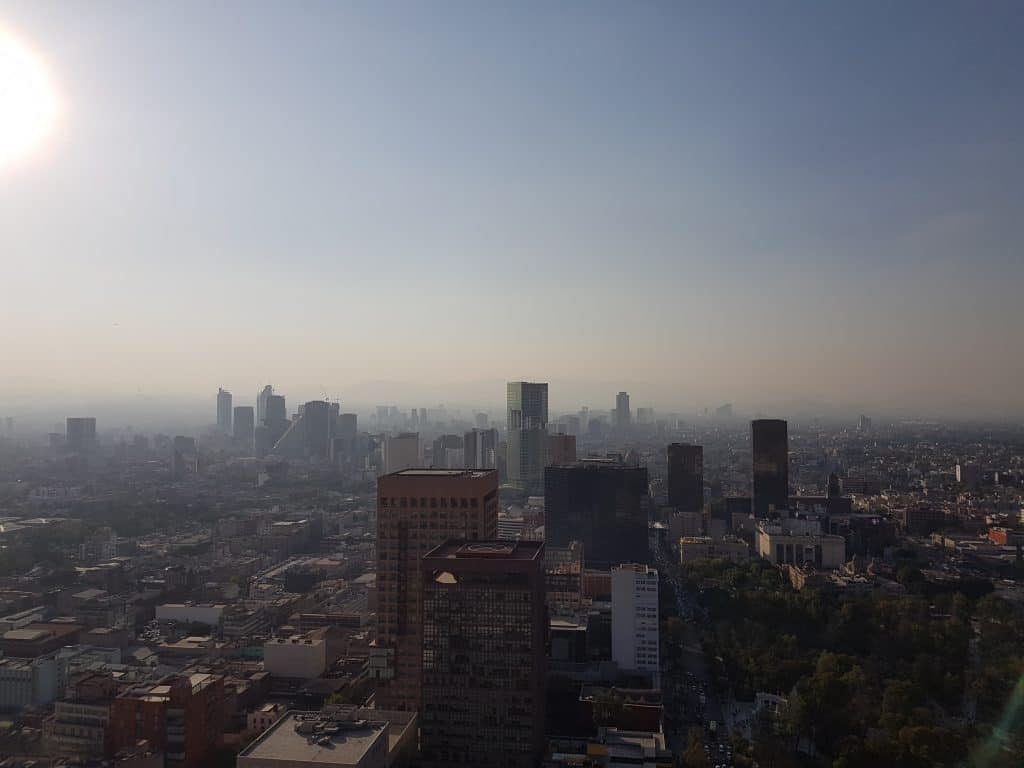 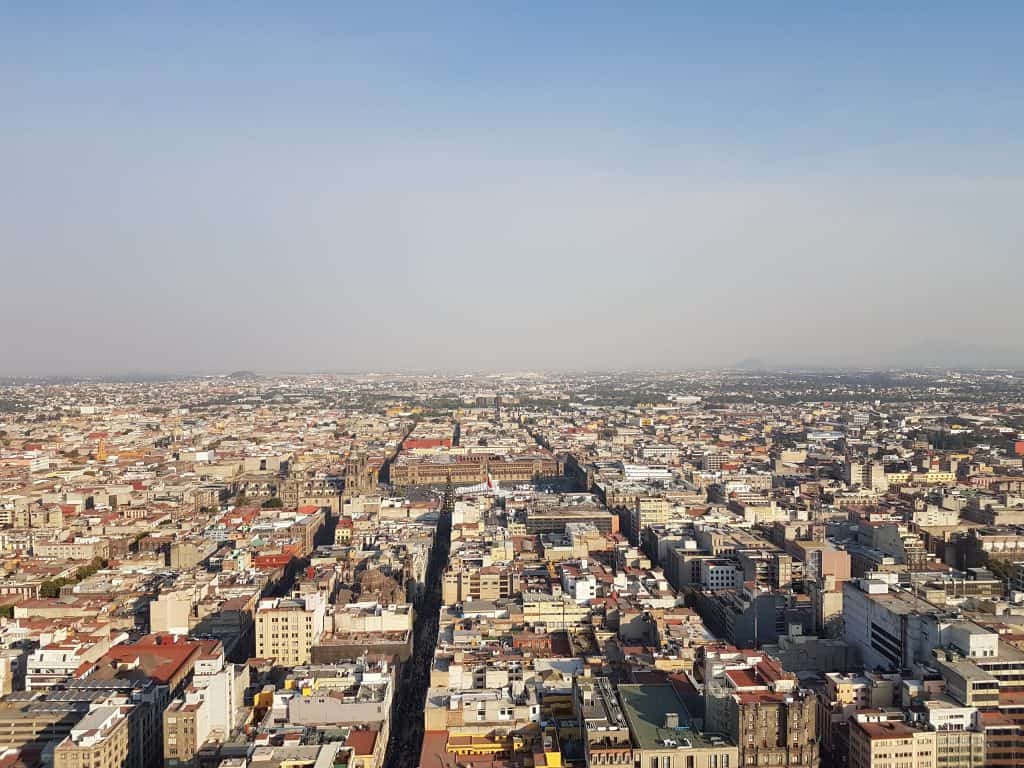 Mexico City is immense, which you realise when you’re looking down from the birds eye view. As far as my eye could see in all directions there was the city. Parts of it were clouded with what I assumed was smog, but I later learned was actually fine volcanic ash.

We searched for somewhere different for dinner, looking for the key indicators of local presence to measure standards. I ordered a cheese empanada and nachos. The nachos barely resembled those served up in western society. A salty goodness of crunchy chips topped with a couple of liquid sauces, diced fresh tomato and onion and jalapenos. The empanada was out of this world! We also had a couple of cocktails each – best Pina Colada I ever had – all for less than 300pesos each! All up I’ve gone through a smidge over half of the 2000 pesos I withdrew yesterday.  Half went on the taxi, tower entry, deposit on the power adapter from the hotel and a new pair of sunglasses after mine broke this morning!

Tomorrow we venture to Teotihuacan – one of the largest pyramids outside of Egypt – recommended as must see by my boss. I anticipate a pretty good sleep given today’s seven odd hours of walking!

You can check out other amazing things to do in Mexico City in 12 reasons to visit Mexico City. 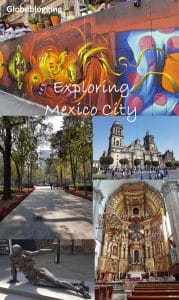 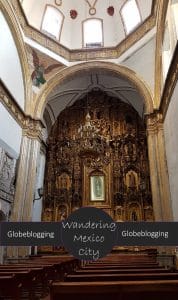