As a drama student of many years I have a keen appreciation of anything Shakespeare done well, so when an advertisement for Popup Globe Sydney came across my Facebook (how does it always know these things?) my interest was piqued. So much so that sitting at home one night I bought myself a ticket to my favourite of the Shakespearean works; A Midsummer Nights Dream. Even so many years since I last performed in a Midsummer’s production, I can still recite Puck’s final monologue.

What is the Popup Globe?

The Popup Globe is a replica of the old style theatre originally built by Shakespeare himself. It is a circular theatre with a stage set erected at the front, which I assume serves for all four plays, and three levels of seating built into the walls of the globe. Directly in front of the stage is open floor for standing patrons. At various stages of the performance the actors walk through the patrons on the floor. Some rows of seating are on the side of the stage. All seating in the walls of the globe is undercover, but the floor is open air so vulnerable to the weather. 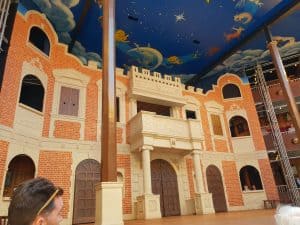 Where is the Popup Globe?

The popup globe is currently erected at Moore Park in Sydney, in the open grass area bordered by the stadium and Hordern Pavilion.

How do you get to Popup Globe?

Moore Park is a short journey from Central station, which you can take by Bus, Uber or Taxi. However if you prefer to drive there is plenty of parking available. There is a multi-storey carpark but I always try and find a metered spot on Driver Avenue for ease of getting in and out. It’s a short walk into the complex. Check the duration of your performance so you know how much time you’ll need to pay for.

What’s on at the Popup Globe?

There is a rolling timetable of four of Shakespeare’s plays currently running until November 5th 2018, unless extended;

Tickets are available through Ticketmaster and prices vary according to seating location, starting at just $25 for a standing floor spot depending on peak and off-peak performance.

Where should you sit?

That all depends on the experience you want. It is immersive theatre so expect audience involvement. If you can spend the couple of hours on your feet then standing is great fun, but be warned there’s a good chance you might be picked on from the stage, and depending on how close you are probably get some of the fake blood the actors relish throwing on as many of the audience as they can.

When is the best time to go?

I checked out a matinee performance commencing at noon and was all decked out with my sun-protective gear in anticipation of being in the full sun. However I was able to grab a spot near the stage which was shaded by the wall, and the shade spread until the whole floor was in shade as the sun moved over. If you want to stand you’ll want good weather. Evening and matinee performances are available for both weekdays and weekends.

What should you see?

If you aren’t much of a Shakespeare connoisseur the lighter comedies will probably be more to your liking.

Being my favourite work of Shakespeare, my standards are high, and I’m always interested to see the interpretation brought by a company.

This is pretty different!

Midsummer’s isn’t usually a play with a lot of opportunity for audience interaction, but this production has been amped up to create it. The actors have no problem interacting with the audience directly, one woman was singled out by the actor playing bottom and he referred to her throughout the performance. The actors will also seize any opportunity to incorporate something from the audience. At one point Hermia was looking longingly around the seats for Lysander, who had mysteriously disappeared. At that moment someone dropped something which clattered loudly against the metal floor. Hermia’s head snapped to the direction of the noise, calling out ‘Lysander are you there?’ When her calls were met with silence she grinned up at the seats and said ‘oh, it’s just someone dropping their chocolates.’

The pre-event email warned of the likelihood of the standing patrons being splattered by blood, and assured that it would wash out. I thought I was pretty safe with this play, but they still found an opportunity! It was pretty funny how we all shrunk away as the actors delightedly flung it out over us. I thought I’d escaped unscathed, but found a few spots on my face when I got back to my car.

It’s a pretty different kind of performance too. The fairies wore Maori costume and spoke their scenes in what I assumed was Maori, confirmed when I heard ‘Kia-Ora’ towards the end and when the finale included something resembling the Haka. While staying true to the Shakespearean dialogue there were parts where the language and costumes were more modernised. If you aren’t familiar with the story, throughout the play there are scenes with a group of actors who are preparing a play to perform for the duke. The group features a character named Bottom, who is famously transformed into an Ass by the impish fairy Puck as a prank on the fairy queen Titania. In this performance they were dressed as tradies, wearing high visibility vests labelled as ‘Sweet Ass Mechanical Solutions.’ 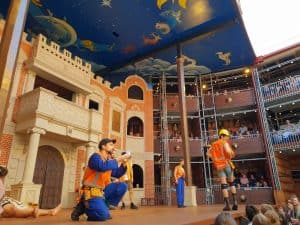 I’ve certainly never laughed as hard at a Midsummer’s performance! The actors are high energy, rambunctious and ham up pure melodrama in order to get more laughs. They also give intensely physical performances, leaping, running around and rumbling on stage. Even though my legs and back were starting to ache by the end, it was worth it to be in the thick of the action, and you can’t beat the price for a great afternoon’s entertainment!