One of the best coastlines in the world!

When it comes to Australian road trips, they don’t come much more iconic than a trip on the Great Ocean Road. Winding 243km along the Victorian coastline it is a spectacularly picturesque glimpse of Australia’s scenery that should be on the must-do list of locals and visitors alike. I’ve driven it once, and it took my breath away. It’s definitely on my list to drive again! However, on my next Great Ocean Road trip, I’ll plan a very different experience.

The Great Ocean Road was built by three thousand returned soldiers and sailors of the first world war. Finding employment was a crucial factor to their rehabilitation and reintegration into society and they were provided good pay and conditions, subsidised by the RSL’s when the government funding was irregular. The arch at the Torquay end of the Great Ocean Road commemorates the largest enduring war memorial in the world. 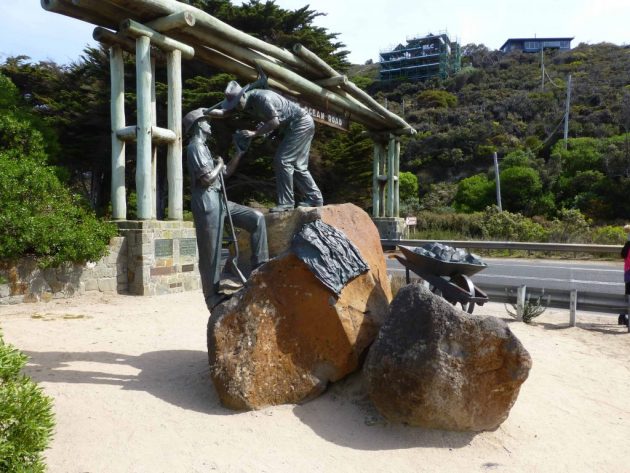 This post contains affiliate links. Making a booking or purchase through these links comes at no additional cost to you and is a great way to show your support for this site.

Where to find the Great Ocean Road

While much of the road between Melbourne and Adelaide follows the coastline, the official Great Ocean Road is not comprised of the entire stretch. Commencing at Torquay on the Melbourne side, and Allansford on the Adelaide side, the road then winds between inland and the coast as it continues on its way to the state capitals. While it is far from the most direct route, it is certainly the most scenic.

The watery grave of ships along the coastline give this stretch the name The Shipwreck Coast. It stretches from Cape Otway to Port Fairy and is known to be the resting place of over 600 ships, though according to wikipedia only about 240 have actually been discovered.

Given the notoriety of this stretch of coastline it is also home to numerous lighthouses. The Split Head lighthouse at Airey’s inlet is open to the public and offer views of the Eagle Rock Marine Sanctuary, which wraps around Split Point and is haven to a diverse range of marine life. The lighthouse has been featured in films and TV shows.

Make some time to visit Cape Otway and the surrounding national park. The Cape Otway Lighthouse is Australia’s oldest working lighthouse and is heritage listed.

If you’re planning the timing of your Great Ocean Road trip rather than just driving along and stopping when you feel like it, then there’s some things that you really need to know that the guidebooks probably wont tell you.

Do not judge travel times according to distance.

Yes, it really can take 7.5hrs to drive 190kms. Without stopping for lunch. Do not underestimate how much there really is to see along this road. Many things worth seeing are a deviation from the main road, and before you know it an hour or more has passed. Do that a few times and there goes the bulk of your day. Take as long as you want from Adelaide to the beginning of the Great Ocean Road. If you want to actually see or do all that the trip has to offer it will require more than two days on the Great Ocean Road itself. Next time I won’t do it in less than four.

Still referred to as the Twelve Apostles, in reality the fury of the sea has left only eight of the limestone stacks standing in the ocean off the coast. As time passes it is likely more will succumb to the wind and the waves.

Given their landmark status, expect the Twelve Apostles to resemble the queues, and behaviour, of those at Disneyland. It is utter chaos of people jostling for a position in order to get a view and some photos. I eventually stood on rocks bordering the fenceline and held my camera as high as I could while snapping away hopefully. It is better if you can get there in the mornings as you beat the day tours out of Melbourne, which, unless you have a fancy pants whizz bang camera with some fandangled settings, you’ll want to do anyway. While they may look very pretty with the sun lighting up the water all around them, the average camera will capture dark shapes emerging from bright water and none of the actual details. 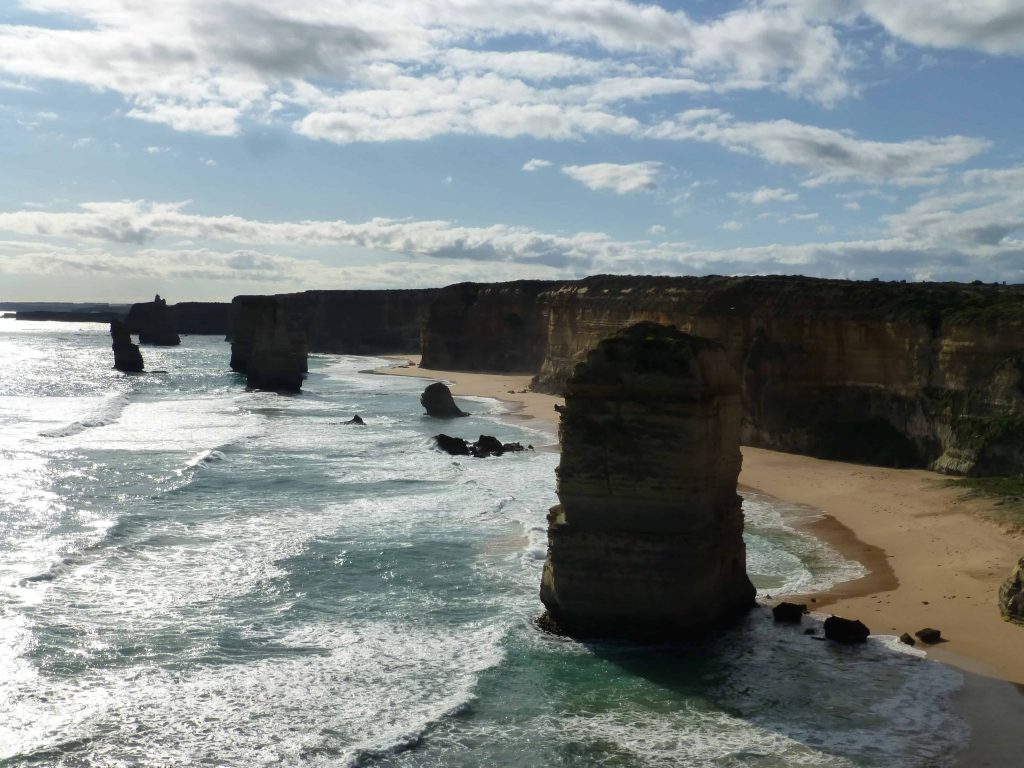 There are plenty of other spectacular formations along the coastline. My poor planning meant I didn’t get to the Twelve Apostles until after 4pm, and by that time I was so exhausted that I drove straight through to my next stop in Lorne without stopping, except to take a single photo near Apollo Bay because it was such an amazing shot.

The stretch of road between Apollo Bay and Lorne is long, and winding, with cliffs on one side and the ocean on the other. If you’re coming from Apollo Bay there are also very few places to pull over so have a break first. The light around Apollo Bay at sunset is just magic for photographs. You need to be coming from the Lorne side to take full advantage. 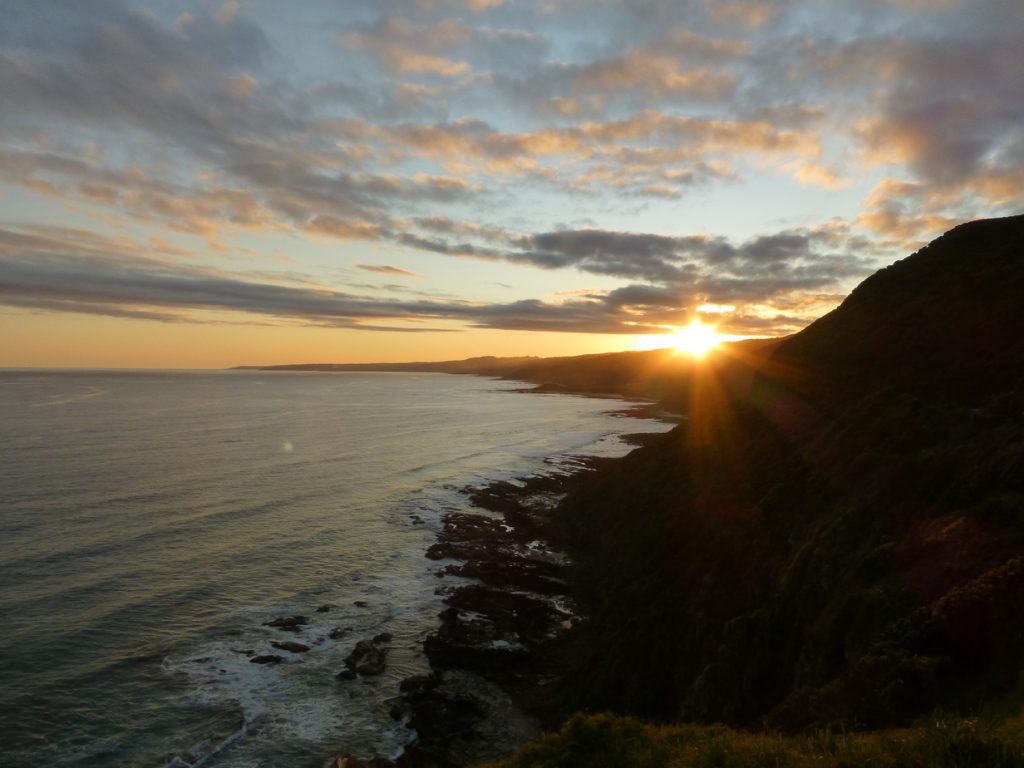 Wear good walking shoes. Many of the lookouts or beaches are up to a kilometre from where you park, which also adds to the overall time each stop will take you.

Where to stay on the Great Ocean Road

Technically I only stayed one night on The Great Ocean Road, in Lorne, but I’m counting Port Fairy as it is only a short distance before the Allansford end, and the route still follows the coast, although not so tightly.

If you’re looking for pub-style accommodation, it’s pretty easy to find comfortable quality at a reasonable price. I was really happy with all of my finds. Between Adelaide and Port Fairy I stayed in Victor Harbour and Robe, which will be covered in a later post.

I would recommend staying at least another night between Port Fairy and Lorne.

Where to stay in Port Fairy

Port Fairy is a really cute little fishing town 283 kilometres out of Melbourne. It is also home to The Caledonian Inn, the oldest licensed hotel in Victoria which offers a good feed, and Griffiths Island, a breeding colony of short-tailed Shearwater that also features a lighthouse that is worth the walk out to.

I stayed at the Comfort Inn and Seacombe Hotel. 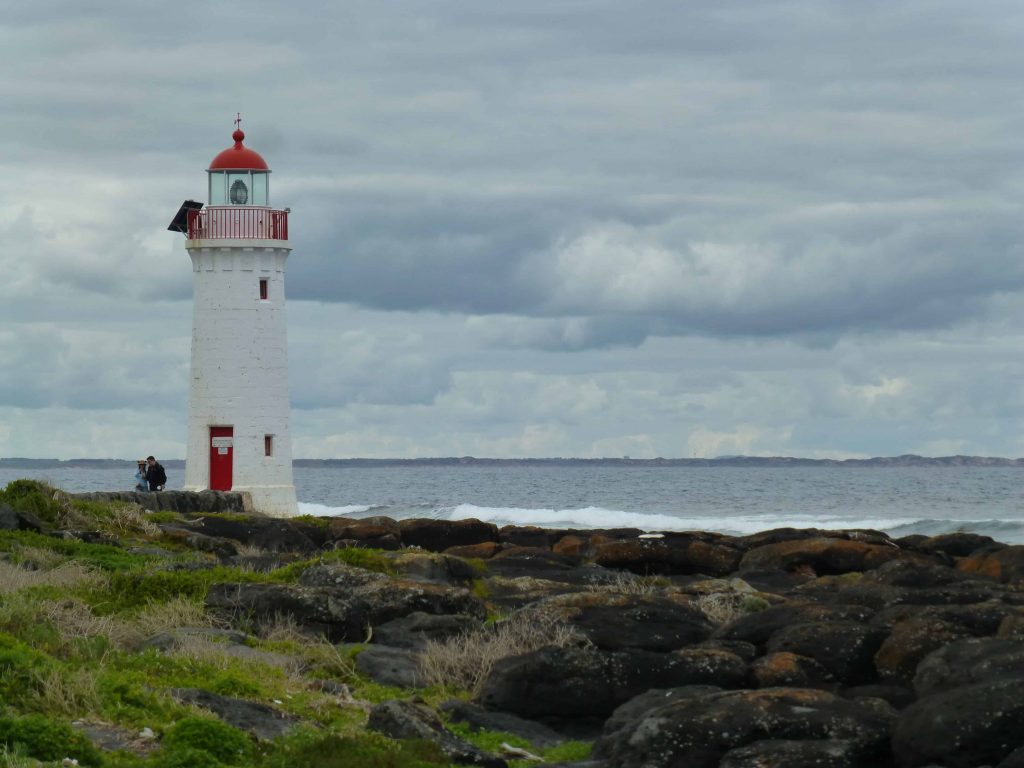 You can also check out Air BnB options near Port Fairy;

Where to stay in Lorne

The town of Lorne sits on Louttit Bay and is a popular spot for surfers and travelers of the Great Ocean Road. It is also well known for its arts community so make some time to browse the stores if you can.

In the centre of the township of Lorne can be found the Lorne Hotel. The pub is onsite offering good meals, and I didn’t find that it was noisy from my room.

If you happen to be taking your Great Ocean Road trip between June and October, you’ll want to allow time to keep watch for whales. The Southern Right whale is a frequent sight along the coastline, with sightings often recorded at Apollo Bay, Lorne and Logan’s Beach near Warrnambool.

Logan’s Beach Whale Nursery is one of Australia’s most popular whale viewing sites. Since 1970 the whales usually arrive around May and stay until October, spending the summer and calving where the food supply is abundant.

The Southern Right whales preference for shallower waters and the fact they float when dead, made them an easy target for hunting and by the time the bay-whaling industry collapsed in the 1840s they had been hunted to the brink of extinction. Whaling was Australia’s second biggest industry in the early 1800’s, and several whaling stations were located nearby, including nearby Port Fairy.

If you pass through at the right time of year make the time for a visit. Even without any whale sightings the views are worthwhile. 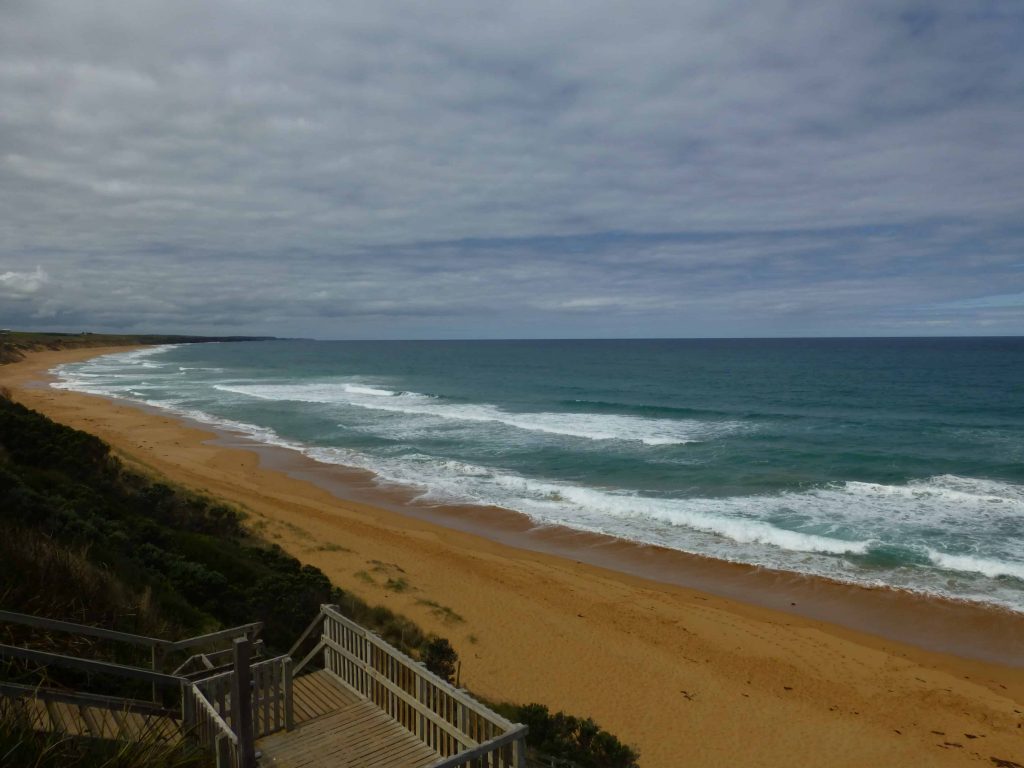 Surfing on the Great Ocean Road

While I am not a surfer myself, it is an incredibly popular past-time in Australia and the beaches along the Great Ocean Road are popular destinations for surfers. While many beaches along the coastline, such as Childers Cove, aren’t suitable due to strong currents, submerged rocks and unstable cliff’s, one of the most well known surfing beaches in Australia, Bells Beach is located near the Torquay end of the Great Ocean Road. 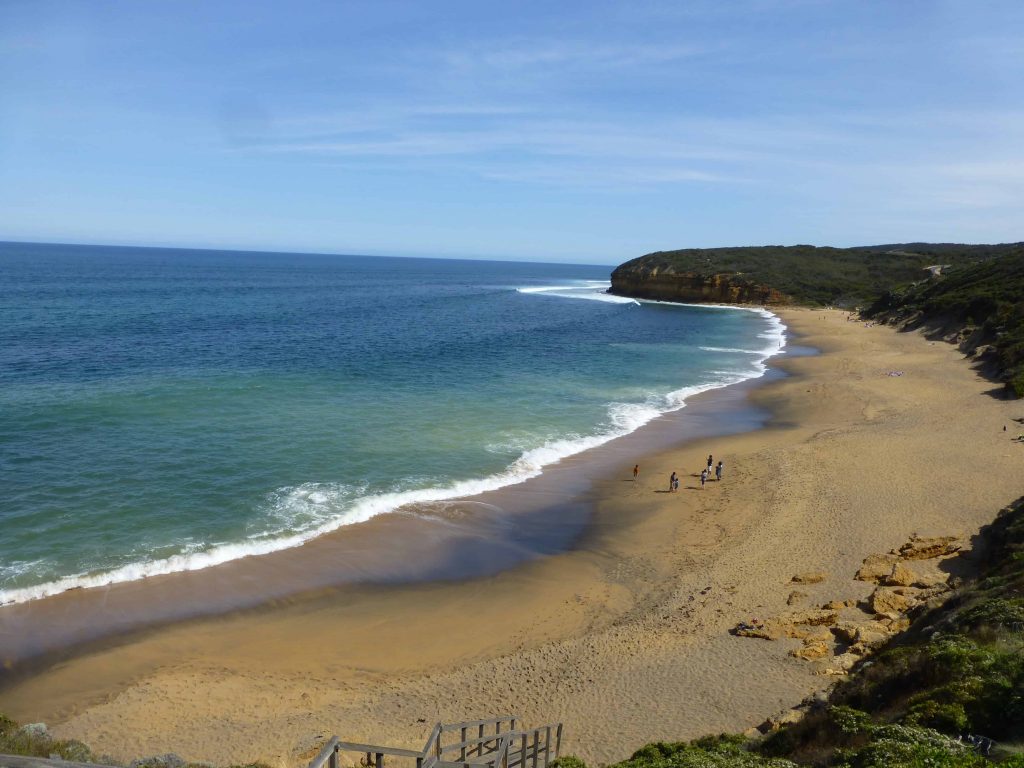 If you happen to be finishing up in Melbourne and spending some time there, check out day trips from Melbourne.

Like my photos? These were taken on an older model point and shoot Panasonic Lumix with a Leica lens. The latest model features an amazing 60x zoom! 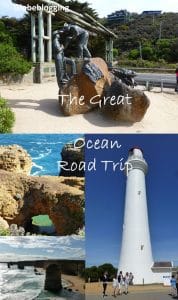 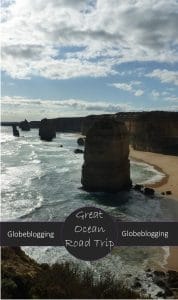