I’m awake well before my alarm. Since tossing and turning doesn’t seem conducive to getting back to sleep I figure I’ll just get up.

When I emerge from the room there is a line of people going into the dining room for breakfast. I know I have to pay for breakfast here but otherwise have no clue whats going on. I ask a girl standing in line what the arrangements for breakfast are, she just shrugs and says no idea. So I join the end of the line and dish myself up some scrambled eggs from the waiting hot tray. With no seats in the room I take my plate and sit on the couch outside. Before too long one of the staff is pointing and gesturing me back into the room while talking in Spanish.

In the dining room I am shown to a seat that’s been stuck at the end of a long table. There is no one in my group here. No one speaks to me and I feel decidedly out of place. Glancing around the room most of them appear to be wearing the same shirt. It dawns on me I appear to have crashed some other groups breakfast. This is confirmed when I walk past the reception desk and the attendant asks me if I am with Intrepid. He tells me my group doesn’t have breakfast included and asks me to pay. I hand over my $6 US (so wasn’t worth it) and ask what time Fernando’s opens, he tells me 7am.

Its 6.55am so I set off down the street and grab two takeaway coffees. It’s Ruth’s birthday but I cant find any pastry shops open to get her something tasty. A coffee will have to do.

We’re outside waiting for our shuttle pickup to Atitlan before 8am as instructed. But…Guatemalan time. By the time 8.45 rolled around I was uneasy and ready to bail on the whole idea. I had no sooner turned to Ruth and said ‘at what point do we give up and go do something else for the day’ than the shuttle van bumped along around the corner.

Given my propensity for motion sickness I always sit as close to the front as I can so I nab the first available seat. It is more like three quarters of a seat, and located next to a couple who feel a periodic urge to noisily show their affections for each other. Ruth is somewhere up the back deep in boisterous conversation with some fellow travelers of various accents. It seems people mostly go to Lake Atitlan  to spend a few days. The father of one guy on the bus has a house there, so he is descending with a few people he met at a hostel. I wonder about the wisdom of this venture in a day, especially with our tour departing Antigua at 4am the following morning. That does nothing to help my unease.

With nothing to do except observe the countryside and the driver and listen to grabs of conversation from the back it is a very long two hour trip. 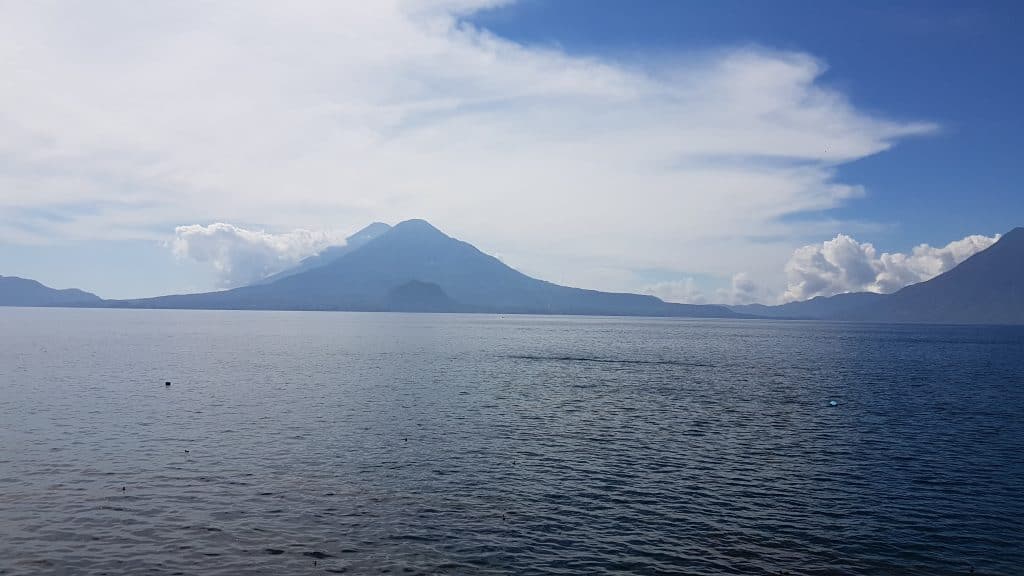 Our first glimpses of Lake Atitlan come as the van comes around a corner and commences a winding journey to the bottom. Crystal clear it reflects the mountains positioned around it to the sky, each bend bringing it back into view as we wind lower down the mountain towards the town of Panajachel. The van weaves and turns through crowded streets lined with market stalls filled with local wares. Later inspection reveals them to be more of the same, just stamped with the name of a different town. One of the Spanish speaking passengers tells Ruth that the driver says our pickup point is a travel agency beginning with X. I vaguely remember passing it.

When the van door opens just after 11am a number of people are crowding the door. I step through and stand off to the side to wait for Ruth. She gets off the bus and is immediately engaged in conversation with one of the men who was waiting at the door. She walks off beside him. He tells her, and me following behind, that this is the pickup point for the shuttle back to Antigua. He leads us through streets down to the water. I follow a couple of metres behind, wondering why Ruth is going with this guy and who he is. She explained later that she hadn’t seen him waiting at the van door and had thought he was a fellow passenger being helpful.

The whole confusion was largely our own creation. Unlike most of the other things we had planned and done, we are woefully and inadequately prepared for this adventure to Atitlan. Hence we were unprepared with the knowledge needed to prevent being taken advantage of. After our experience with organised tours in Mexico City we had declined the organised tour which departed Antigua at 5.30am in favour of taking the shuttle and doing our own thing. Hindsight is such a wonderful thing.

So this guy starts talking about us getting on his boat. I stop him with ‘hang on a second, who are you?’ He explains he is a local guide and comprehension dawns – he’s rustling up business for himself. So we tell him which villages we are interested in going to. He explains the times involved in journeys across the lake and says he’ll take us for one hundred. I’m not entirely comfortable with the idea but we’ve come here to experience the area so we agree and follow him to his boat. Just as we are about to hop on I ask him to clarify which currency the price is in. Turns out its $100 US, which neither Ruth or I have. We tell him we don’t have that money and leave.

It’s not long before another boat owner is chasing us down to get our business. Again he quotes an extortionate price to the islands we want to visit. He quotes a reduced amount of $75 US to go to the villages that would have been included in the tour if we’d taken it.  He also tells us we’ve missed the public boat. So if we want to do anything on the lake hiring a boat seems to be our only option.

I tell him we need to discuss it and we walk away. We have been walking only a few moments when he catches us again. This time he offers to take the two of us for the $75, which he brings down even further to 500 Quetzals. I still feel uneasy and my mind is racing ahead to all of the things that can go wrong. But we haven’t come all this way on our last day in Antigua to do nothing either so Ruth and I exchange an uncertain glance, and we agree.

His name is Daniel and it is his boat. But he’s sending us off with his brother, who it transpires speaks not a word of English. Daniel asks for his payment. I am deeply mistrustful so tell him we will pay half now and half when we are safely returned to the port. He doesn’t like it much, but he agrees and Ruth hands him 300 Quetzals. There is no way I am going to end up stranded on the other side of the lake with them demanding more money to take me back across. This is the best strategy I could come up with.

Now don’t get me wrong, Lake Atitlan and its surrounds are very pretty. Had I had the luxury of more time and better preparation my experience would probably have been a different one. The first town he took us to was Santa Catarina, which pretty enough given its bright colours and designs painted all over the buildings. We took a wander through an artists gallery and strolled along the stalls selling the same tourist stuff we’d seen everywhere else, despite the women sitting on the ground weaving. The patterns used are largely the same it seems. Then our allotted 25 minutes was up (that one had been hard to convey, I had only learned the numbers to twenty. I eventually typed the number in my phone calculator.) and then we were off to the next one. 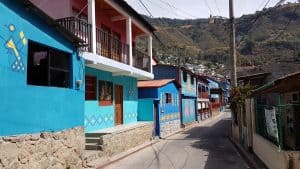 The town around the next corner, San Antonio Palopo, was lacking the colour, and in some cases structural integrity of those in Santa Catarina. They appear more like the temporary villages seen in Africa erected with corrugated iron and whatever materials happen to be available. We are not enthused about being here and I think I manage to agree with our driver we will be back in 15 minutes. As we disembark the boat a pre-teen boy is chattering away at us. But he disappears when he realises we aren’t going to pay him to take us anywhere. Probably a deal struck with the local boat owners. I survey the nearby water to satisfy myself there are other boat options available should we be abandoned here. 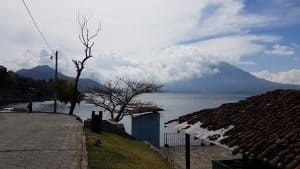 We wander up the street and take some photos of the lake. 15 minutes later we’re waiting on the dock to leave again. Our driver manages to say ‘ceramic factory’ and points up the hill. This rings a bell, I remember hearing there was a ceramics factory somewhere on the lake. I have no intention of lugging ceramics across four countries and I want to be back to the town where our bus back to Antigua departs. ‘Panajachel’ I say and he points some more. ‘Panajachel’ I say again and he eventually nods and says ‘ok’

All up we’ve paid about $68 US for the two of us to have a boat ride on Lake Atitlan for approximately 90 minutes with someone who couldn’t tell us anything about where we were. We’ve handed over all the Quetzals the both of us have. It probably wasn’t all that bad, but we both feel ripped off by the experience. Still, we’re on dry land again and in the town where the shuttle picks us up.

All I want to do by this time is have a meal and a cocktail or three. We end up at hotel Posado de Don Rodrigo, which is the pickup point according to our ticket. There is quite a pleasant view over Lake Atitlan and we kill most of the time until the shuttle there. We do attempt to find the travel agency the first driver said was the pickup point to no avail. A woman with excellent English at another agency confirmed we should wait at the place stated on our ticket and that we should be there early because they wouldn’t wait for us.

The shuttle arrived early with the driver asking for me by name. The most relaxed I felt all day was taking my seat on that bus! Due to traffic we had a slightly longer trip home. We arrived, exhausted, just before 7pm with the prospect of repacking ahead of us.

My advice if you intend to visit Lake Atitlan is to do your research and be prepared. If you’re only thinking about a day trip you’re probably better off on the organised tour.

You can find out more about things to do in Lake Atitlan and Antigua here.

You can find some options for booking a more organised Atitlan experience with some tours below. You can also read about my experience hiking Volcan Pacaya. 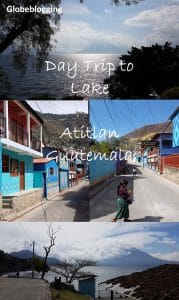 1 thought on “An anxious day at Lake Atitlan”